'Revenge': Inside the FBI Discussions Between Rosenstein and McCabe on Investigating Trump 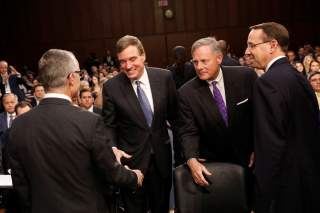 Former Deputy Attorney General Rod Rosenstein and former FBI Deputy Director Andrew McCabe discussed whether opening an investigation of President Donald Trump days after he fired James Comey would be perceived as an act of revenge for getting rid of the FBI director, according to interview notes from the special counsel’s investigation released this week.

McCabe told FBI agents during an interview on Sept. 26, 2017 that he met with Rosenstein multiple times in the days after Comey’s firing on May 9, 2017 to discuss plans to appoint a replacement, as well as how to handle the ongoing Russia investigation.

According to the notes, which BuzzFeed News and CNN first obtained through a Freedom of Information Act lawsuit, McCabe told the FBI that in a May 16, 2017 meeting with Rosenstein he brought up the possibility of opening an investigation of Trump for obstruction of justice and possible collusion with Russia. (RELATED: McCabe Says Rosenstein Proposed Wearing A Wire In Trump Meeting)

“Rosenstein immediately started to question McCabe about his basis for opening the cases, his legal theory, and similar questions,” the notes say.

“They also discussed whether the investigations would be perceived as revenge.”

Trump was not a target of the FBI’s Russia probe before he fired Comey. Up until that point, the bureau was investigating four Trump associates — Michael Flynn, Paul Manafort, Carter Page and George Papadopoulos — to assess whether they worked with Russians to influence the 2016 election.

McCabe’s decision to formally investigate Trump was a monumental moment in the investigation. The day after the meeting, Rosenstein appointed Robert Mueller to serve as special counsel. The former FBI director inherited the FBI’s probe, including the obstruction investigation of Trump.

McCabe also opened a criminal investigation into whether then-Attorney General Jeff Sessions lied to Congress about his contacts as a senator with Russian ambassador Sergey Kislyak. Rosenstein oversaw the FBI and special counsel’s investigations because Sessions had recused himself from Russia-related investigations.

The special counsel’s investigation uncovered no evidence that any Trump associates conspired with Russia. A report of the investigation also said that there was insufficient evidence to charge Sessions with perjury.

McCabe has said in interviews that Trump’s interview with NBC News anchor Lester Holt two days after he fired Comey was a turning point in his decision to formally open an investigation of Trump.

“What changed McCabe’s calculus on whether to open an obstruction case on Trump was Lester Holt’s interview on Trump, when Trump said he was thinking about Russia when he fired Comey,” the FBI interview notes say.

“The timing of the opening of the investigation right after Comey’s termination was ‘concerning’ but the facts lined up to support it.”

McCabe, who is now a CNN analyst, has come under intense criticism for opening the investigations of Trump and Sessions, especially given the results of the special counsel’s probe. He was fired on March 16, 2018 after the Justice Department’s inspector general found that he lacked candor during interviews regarding his authorization of leaks to the media in October 2016. Federal prosecutors have reportedly empaneled a grand jury to consider false statements charges against McCabe, who has sued the FBI and Justice Department over his firing.