Review: Why Netflix's "Tiger King" Is Drawing Millions of Streams 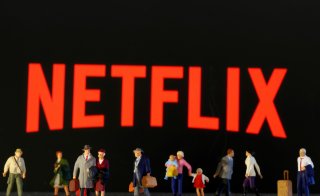 Only in America is Joe Exotic's story possible.

The 50-something, mulleted, gay proprietor of a roadside exotic zoo in Oklahoma, the man whose real name is Joseph Maldonado-Passage is a notably bizarre and larger-than-life character, even by the outsized standards of the modern true crime canon. And that's even before we get to his animal fascination, his penchant for polygamy, his campaigns for president and governor, and the murder-for-hire plot that ultimately landed him in prison.

Tiger King: Murder, Mayhem and Madness, a seven-part documentary that debuted on Netflix about a week ago and clung to the top spot on the service's top ten list for much of that time, has served to keep a lot of homebound TV viewers sane during these scary, uncertain times.

Sure, the show is something of a mess, especially structurally, as it frequently jumps all over the place storytelling-wise. But the show has clearly captured the nation's imagination because it takes a wild true story and tells it in the wildest way possible.

You've probably seen colorful characters on true crime streaming shows before, but that was nothing compared to this. Tiger King is full of the sort of moments that are so off-the-charts crazy that you'll want to rewind to watch them again. The series is also a rare piece of true crime pop culture that would have been worthwhile even there hadn't been a murder plot associated with it.

Tiger King, which was directed by Eric Goode and Rebecca Chaiklin, is nominally the story of Joe Exotic. This Oklahoman oddball who not only operates the tiger zoo but also dabbles in electoral politics, broadcasts an Alex Jones-style livestream, writes country music songs, and marries a succession of much younger men-including, at one point, two of them at once.

The story mostly coalesces around Joe's blood feud with Carole Baskin, an animal rights activist and rival zookeeper whom he was ultimately convicted of trying to murder-although the series also spends the bulk of one episode looking at allegations involving the unsolved disappearance of Baskin's former husband, who Joe believes died by Baskin's hand.

As for Joe, in addition to the murder plot, there were also financial shenanigans and some unsavory practices involving treatment of animals.

The show eventually zooms out further into the exotic animal world, introducing us to other figures who seem to preside over cult-like followings and various criminal hangers-on. Joe Exotic, it turns out, is not the only proprietor of a wild tiger zoo who lives a polyamorous lifestyle.

The back half of the series, meanwhile, is focused on the murder plot. The whole sordid affair was in part brought to light by an informant, who at one point uses the immortal phrase "I don't have anything to do with any of this. Other than the lemur I got my ass in a pinch."

Yes, this gentleman claims to have purchased a lemur with illegal papers, which led the Fish and Wildlife Service to threaten him with federal charges unless he rolled on his co-conspirators. It's a familiar story from fiction and from true crime stories, except usually there's not an illegal lemur involved.

The other highlight is when Joe himself delivers the most vulgar eulogy in human history at the funeral of his husband — it includes the euphemism "golden nuggets" — before segueing into an original country song.

The filmmakers seem to know just how absurd this all is. One of Joe's exes sat for what was probably hours of interviews, shirtless the entire time. The informant has filmed jet-skiing towards the camera as "Eye of the Tiger" plays. We learn of a group of guys who launched the ill-fated venture of a Las Vegas party bus with exotic animals aboard.

If you love Tiger King, there's a lot more Joe Exotic content out there, in most of the other usual true crime media. There's a long-form magazine story, a podcast, and there's even a fiction TV adaptation on the way, adapted from the podcast, with SNL's Kate McKinnon to star as Baskin. There's no word on who will play Joe, but the social media consensus seems to favor Danny McBride. I also can't wait to see what kind of Tiger King parody the Documentary Now people might come up with.

It's not a mystery why Tiger King has caught on in such a big way: It's a compelling story, involving unusual people, doing all sorts of bizarre things that you've never seen before.