The Rifle That Refuses to Die: Why the M4 Carbine Won't Go Away 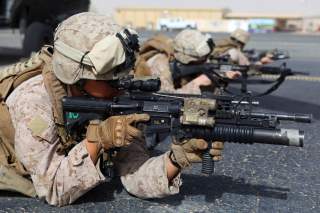 In the January issue of The Atlantic, retired Maj. Gen. Robert Scales slammed the United States Army’s M-4 carbine, and called for an entirely new weapon in the hands of the modern American soldier.

Scales describes the 2008 Battle of Wanat—when the Taliban attacked a forward outpost defended by American troops—and his own experiences in Vietnam with faulty M-16 rifles.

(This article by Kyle Mizokami originally appeared at War is Boring in 2015.)

In both instances, the M-16 and its descendant, the M-4 carbine, failed in battle and cost American lives.

As a historian and combat veteran, Scales makes valid points. His recommendation, that the Army replace the M-4 with a new weapon, is unnecessary. Much like the M-4 Sherman tank of World War II, the M-4 carbine is a compromise driven by the Army’s global responsibilities.

Scales recites the long and tortured history of the AR-15 and M-16 series of rifles, of which the M-4 is a shorter, more compact version. Among other features, the M-4 features a shorter barrel for easier handling in tight spaces, such as inside vehicles and urban environments.

He cites a change in the gunpowder sent with the original M-16 during the Vietnam War as the cause of frequent jamming. Thin barrels also made the M-4 carbine prone to overheating in Afghanistan, particularly during the Battle of Wanat, in which several M-4s became unusable.

In the past, Scales has described the M-4 as “virtually useless” against enemies wearing body armor.

Finally, Scales faults the basic design of the M-16 family. Gas from the gunpowder explosion circulates back into the rifle, which cycles the weapon. But this also injects residue into the guts of the rifle, fouling the weapon at critical moments.

Such a weapon will need a heavier bullet and longer barrel. The rifle should also have a different operating system, ideally one in which gases push a piston that cycles the weapon, keeping most gunpowder residue out of the rifle’s internals.

Scales even suggests adding a ballistic computer to the rifle—to aid in long-distance aiming.

Unlike many armies, the U.S. Army deploys worldwide into every possible geographic setting and climate.

In the decades since adopting the M-16 series, the Army fought in Vietnam, Grenada, Panama, Kuwait, Somalia, Iraq and Afghanistan. It fought in jungles, deserts, cities, flat plains and rugged, high mountains.

One year, the Army has to fight in an environment more suitable for a full-size battle rifle, such as Afghanistan, and an urban environment that favors the smaller M-4—such as Baghdad—the next.

During the past decade, the Army had to fight in those two different battlefields … at the same time.

Other considerations drove the Army to the M-4.

Rifles with lighter calibers weigh less than heavier-caliber rifles. Fewer soldiers come from shooting backgrounds than in years past, and the lighter recoil of the 5.56-millimeter round is much friendlier to novice shooters than the 7.62-millimeter round.

Even logistics plays a role.

When fighting thousands of miles from home—with troops supplied via helicopter—the weight of an individual bullet is a very real consideration. A soldier, helicopter or cargo ship can carry more than twice as many 5.56-millimeter rounds as heavier 7.62-millimeter rounds.

There are alternatives to the M-4 carbine. But each of them brings individual advantages—and disadvantages—to the table.

The Heckler & Koch G36 rifle, the German army’s standard issue rifle, is a weapon Scales has mentioned in the past as a possible replacement. But after alleged poor performance in Afghanistan, the rifle gained a bad reputation. Scales no longer mentions the G36.

The G36 also fires the same 5.56-millimeter round Scales derides as “little” and “useless.”

He’s praised the reliability of the AK-47, and some have even proposed the Army adopt a variant of the Russian assault rifle. After all, Israel did it. The AK-47’s legendary ruggedness—and ability to shoot while dirty—would address Scales’ concern about the need for a rifle that is more reliable when dirty.

Another possibility is the Heckler & Koch 416. It outwardly resembles the M-4 and shares many common components. To cycle the weapon, the 416 differs in using a piston instead of gas. This results in a weapon that requires less maintenance.

Still, even the 416 has tradeoffs. The gas-piston operating system makes the rifle heavier than the M-4, and critics complain the weapon is unnecessarily complex. And once again, it still uses the 5.56-millimeter bullet.

Each possible replacement is a compromise in its own right. The rifle that Scales wants—a more reliable gun with a bigger, longer-ranged bullet—simply doesn’t exist yet.

The most prudent path for the Army is to improve the M-4 with a series of upgrades. The AR-15 and M-4 carbine series of weapons are modular in nature, which makes them easy to disassemble and upgrade.

Recently, the Army began upgrading M-4 carbines to M-4A1 status. The main improvement is the heavier barrel, which helps address the problem of overheating in prolonged battles such as Wanat.

Rather than switch to a heavier-caliber bullet, the Army can also simply field improved 5.56-millimeter bullets.

The new M855A1 bullet has better armor penetration, capable of piercing 3/8-inch mild steel at more than twice the range of the of the M855.

The Army can still make further improvements. The Army could still switch to a piston system—and had initially planned to with the M-4A1, until the Pentagon shelved the requirement.

The ground branch could also change calibers altogether—to the newer 6.5-millimeter, 6.8-millimeter, and .300-AAC calibers. Some of these calibers merely require changing the carbine’s barrels.

The Army could even retrofit the M-4 carbine with a ballistic computer of the kind Scales advocates. Austin, Texas-based weapons manufacturer TrackingPoint has already fitted one of its systems to the AR-15 civilian version of the M-4.

The incorporation of ballistic computers into military rifles around the world is inevitable. But for now, the systems need refinement with an eye toward decreased weight, increased ruggedness and lower cost.

The M-4 carbine is not perfect. No weapon is. But according to a 2006 CNA Corporation report, 80 percent of soldiers who had been in combat felt their carbines were reliable.

It’s not the ideal weapon for Afghanistan, for combat at long ranges or for sustained battles such as Wanat.

But the M-4 can—and is—supplemented with support weapons that better suit such situations, like battle rifles or heavier support weapons such as the M-240 machine gun. And improvements to the rifle can keep it competitive for decades to come.

Like it or not, the M-4 isn’t going anywhere.