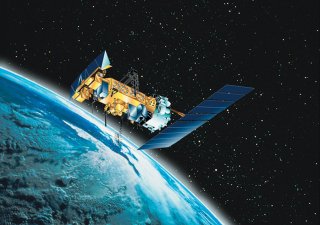 There are many invaluable assets, both civil and military, in space, and they’re vulnerable.

The Secretary of the Air Force, Frank Kendall, spent much of his keynote address during the annual Air Force Association Air, Space & Cyber Conference advocating for a modernized Air Force as one of the most essential tools the United States has to counter an increasingly capable China. And while a crucial part of the United States' preparedness relies on a competent and modern Air Force, space could also be an actual new battlefield.

Kendall’s address stated that Chinese strikes against American or allied targets from space could pose a significant threat to American assets. “There is a potential for weapons to be launched into space, then go through this old concept from the Cold War called the Fractional Orbital Bombardment System,” he explained, “which is a system that basically goes into orbit and then de-orbits to a target.”

A weapon in orbit could have advantages over traditional long-range weapons like intercontinental ballistic missiles, as they wouldn’t fly along a typical ICMB trajectory, potentially thwarting anti-ICBM detection measures and defenses.

Aside from missile-like kinetic weapons, Secretary Kendall also stressed assets in orbit that could engage other satellites rather than terrestrial targets. For example, he acknowledged that China already has at least one satellite in orbit equipped with a robotic arm. An arm that could manipulate machinery could quickly bring this feature to bear against American satellites and disable them or take them out of orbit.

Various ground systems rely on satellite assets, perhaps most notably systems that depend upon Global Positioning Systems or GPS for guidance. If satellites that provide GPS support are taken off-line, navigation for ships, planes, and missiles becomes more complicated.

Lt. Gen. Stephen N. Whiting, head of Space Operations Command, concurred, explaining that while space provides several advantages over land-based systems like ICBMs, space-based platforms have to have a baked-in resiliency to withstand other space-based weaponry.

“Space brings us untold advantages, such as being able to overfly other countries legally. You can’t fly in an airspace above other countries because that’s sovereign territory, but that also means that you are regularly and predictably over other people’s countries in what we call their weapon engagement zone.”

Cliché though it may sound, space is arguably the military’s wild west. The assets orbiting earth are of high importance for civilian and military applications, and they’re vulnerable. Space could play an essential role in the next major war and might be the difference between victory and defeat.