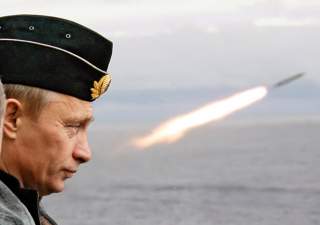 In this duo, the firepower is provided by P-800 Onyx shore-based anti-ship missiles. Cueing in the missiles will be Bykov-class corvettes that will detect enemy ships and then forward the coordinates to mobile BRK Bastion coastal defense installations armed with supersonic Onyx missiles. The idea is that the Onyx batteries, with their radars turned off, can move undetected into a  new firing position and launch a surprise missile attack, guided by targeting data supplied by the corvettes.

“State-of-the-art Project 22160 ‘Vasiliy Bykov’ corvettes will be able to guide ‘Bastion’ coastal missile complexes (BRK) to the enemy,” according to Russian newspaper Izvestia. “The new tactic will permit them to operate from an ambush. The low-observable ‘Bykov’ corvettes, which are manufactured based upon ‘stealth’ technologies, will track the enemy from a safe distance for themselves. But the BRKs, which are now impossible to detect with their radars switched off, having received target designations from the sailors, will immediately conduct a strike against the enemy.”

The corvettes will attempt to track the enemy vessels without being detected themselves, while they relay targeting data to the mobile Onyx batteries ashore. “There is usually a one-hour interval for targeting,” Admiral Valentin Selivanov, former Chief of the General Staff of the Navy, told Izvestia. "During this time, the enemy will not have time to leave the area where it is guaranteed to be destroyed.”

“In addition, the equipment of modern ships allows for a long distance to conduct radio interception, which will help to learn in advance about the enemy's plans and launch a preemptive strike,” Selivanov said.

Interestingly, Izvestia claims that it tested the Bastion-Onyx-Bykov system on U.S. warships in the Black Sea in 2019. “The coordination system of the ‘Bastions’ and the corvettes was tested this year, when the ‘Vasiliy Bykov’ was following U.S. military ships on the Black Sea. The seamen conducted surveillance of the Americans not only visually but also using radars and reconnaissance—these systems permit them to pinpoint the location of ships based upon the operation of their equipment,” Ministry of Defense sources told Izvestia.

To be fair, this kind of coordination is old hat to the U.S. military, which has made great efforts to network aircraft, ships and submarines so that one platform—such as maritime patrol aircraft—can call in missile strikes from more distant platforms.

Another question is the cost-effectiveness of using an expensive 1,500-ton corvette—and its crew of eighty—as a scout for coastal defense missiles. If a Bykov-class ship can get close enough to U.S. Navy warships to  detect them with its sensors, then presumably—“stealth” design or not—the Bykov would be detected and destroyed by American forces. With the proliferation of maritime drones, and the advent of robot surface ships and underwater vehicles, there would be seem to cheaper ways to locate targets for coastal defenses.