RIP F/A-18 Hornet: The Marines Are Retiring This Old Fighter To Make Room For the F-35 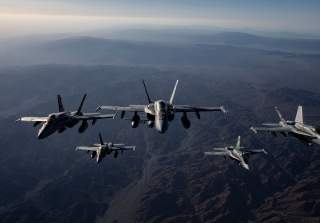 The Marine Corps plan to retire its oldest and most used F/A-18 Hornets and use their parts to repair newer jet fighters, Marine Corps Commandant Gen. Robert Neller said on Wednesday.

Defense Secretary James Mattis has ordered the Marine Corps, Navy, and Air Force to have at least 80% of their fighter aircraft ready to fly by Oct. 1, 2019. The services have until Oct. 15 to submit their plan to meet Mattis’ goal, which applies to F-35 Joint Strike Fighters, F-22 Raptors, F-16 Fighting Falcons, and F/A-18 Hornets and Super Hornets.

“He understands what he wants,” Neller told reporters at a Defense Writers Group breakfast. “He is very clear. He said 80%. Roger that. So, we’ll see how we do – and I’m sure if we don’t make it, we’ll hear about it.”

To help meet that goal, the Corps expects to get rid of Hornets that are too expensive to repair, Neller explained to Task & Purpose. Naval Air Systems Command will tell the Marines which of its Hornets should be recycled based on a plane’s age, the economic value of having it overhauled, and whether depot personnel believe it should be dropped from the Corps’ inventory.

A company in Miramar, California will harvest the retired Hornets for spare parts.

Neller has often complained that as Marine squadrons transition from the F/A-18 to the F-35B and F-35C, they end up with a surplus of older Hornets,which require too much time and effort to keep flying.

The Marine Corps is in the process of replacing its F/A-18 Hornets, AV-8B Harriers, and EA-6B Prowlers by 2032; but delays in the F-35 program have forced the Corps to keep flying these aircraft much longer than originally intended. In June 2016, the Corps had to take 23 Hornets out of storage from the “boneyard” in Arizona.

Congress has contributed to the problem by foisting massive budget cuts on the services in 2013 and then delaying passing spending bills, which are required for the services to buy new aircraft. That combined with the two decades of constant use led to readiness rate for all military aircraft to plunge.

On Wednesday, a Marine Corps spokesman told Task & Purpose that it would have to submit a Freedom of Information Act request to learn how many of the Corps’ 313 Hornets are currently considered flyable.

Aviation has been “the most problematic area” of Marine Corps readiness, but the Corps had fewer major accidents in fiscal 2018 than it did in the prior year, Neller said.

“I would attribute that to the fact that we’re flying a lot more than we were, but we’re still struggling with getting to the readiness level that we want,” Neller said. “Now Secretary Mattis has raised the bar up to 80 percent. So, roger that.”