RIP INF: China, Russia, and America May Enter into a Deadly Arms Race 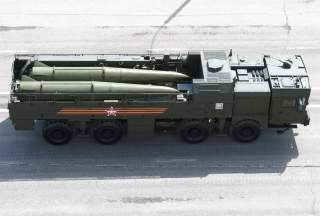 – The end of the INF treaty would again place Europe between Russian and U.S. intermediate-range nuclear missiles.

– Withdrawing from the INF allows the U.S. military to build up a formidable arsenal of missiles to challenge China and Russia.

– The termination of the treaty will galvanize an arms race between the great powers and could threaten the future of the New START arms control agreement.

President Donald Trump announced on October 20 that he intends to withdraw the United States from the Intermediate-Range Nuclear Forces (INF) Treaty. That agreement prohibits the deployment of nuclear and conventional ground-launched ballistic and cruise missiles with intermediate ranges, defined as 500-5,500 kilometers (310-3,410 miles). While the withdrawal will allow the U.S. military to build a formidable arsenal of missiles to challenge China and Russia, the treaty's termination will undoubtedly stoke a budding arms race between global great powers, and it could lead to the demise of other key arms control treaties such as the New START agreement.

In recent years, the United States has accused Russia of violating the INF treatyand has tried to force Moscow to comply using sanctions and weapons development. The Russians, however, have refused to adhere to U.S. demands and have accused the United States of violating the treaty. These mutual recriminations have rendered the INF treaty quite vulnerable over the past two decades. But until now, both parties considered the cornerstone arms control agreement, which halted a destabilizing buildup of intermediate-range nuclear missiles in Europe during the 1980s, too pivotal to withdraw from.

But several factors have pushed the United States to its tipping point, including the growing power of China, Russia's continuing INF violations and the ascent of ardent arms-control skeptics in the White House like national security adviser John Bolton. It's possible that the U.S. withdrawal announcement is part of a last-ditch ploy to pressure Russia as Bolton goes there to talk about the INF and other issues (The United States has to notify Russia six months before its formal withdrawal). But the Russians are unlikely to flinch and return to compliance. Indeed, Moscow is actually set to benefit from not being the first party to withdraw from the INF, meaning the demise of the treaty is almost inevitable.

Although the United States and the Soviet Union were the signatories of the INF Treaty, China has increasingly become a key consideration in the treaty's consequences over the past two decades. Not affected by the INF's limits, China has built up a massive land-based arsenal of short- and intermediate-range ballistic and cruise missiles as part of its wider military modernization. This powerful arsenal allows China to challenge U.S. and allied forces in the Western Pacific. And China's growing military capabilities have caused increasing concern for the Russian military, which lacks similar missiles.

While Russia was willing to violate the INF by developing and reportedly fielding some missiles prohibited by the treaty, Moscow was not willing to be the first to abandon the INF outright. This is largely due to the much-improved relationship between Moscow and Beijing over the past few years, which dampened the need for Russia to gear up too dramatically against China. The Kremlin has also been committed to retaining a moral high ground and protecting its reputation as a responsible actor by not being the first to leave the INF.

For the United States—which has begun designing banned weapons but has not yet violated the treaty—China's growing military might was really the largest driver behind the White House's decision to outright withdraw from the treaty. The United States is now considering a major buildup of land-based intermediate-range missiles to challenge China and does not want to be limited by the INF treaty in any way.

On October 19, The New York Times reported that the U.S. military is preparing to deploy ground-based versions of the U.S. Tomahawk missile in Asia as an initial counter to the Chinese. And the U.S. Army in recent months has also been outlining its plans for developing and fielding ground-based systems with ranges exceeding one thousand kilometers. Weapons such as these would come in handy against China if deployed along the first island chain in the Western Pacific, but they exceed the limits set by the INF treaty. (Okinawa is likely to figure prominently in the U.S. buildup in the Western Pacific, which could further galvanize local opposition to the U.S. military presence.)

Once unshackled from the INF treaty, the United States will undoubtedly bolster its capabilities in its face-off with China. However, the demise of such a landmark arms control agreement will cause serious global repercussions. In the Pacific, China is likely to further improve and grow its armed forces to challenge the new U.S. missile deployments. And Russia will no longer just violate the treaty with select development and deployment of weaponry; it will likely refocus its resources on the buildup of a land-based arsenal of short- and intermediate- range missiles. The cost-effective nature of such weapons is a boon for Russia's increasingly resource-constrained military modernization program, which struggles to fund alternatives such as squadrons of long-range bombers.

The end of the INF treaty would also cause alarm in Europe. For the first time since the Cold War, U.S. allies on the Continent would be situated right between Russian and U.S. intermediate-range nuclear missiles. Germany's Foreign Minister Heiko Maas has already criticized the U.S. withdrawal announcement, and other U.S. allies in Europe are bound to raise similar concerns in private and public. The issue will only grow as Russia builds up its intermediate-range missiles on its western border and the United States responds with its own buildup in Europe. Countries such as Germany are likely to oppose U.S. deployments of such missiles in their territory, but other countries such as Poland and Romania could be more willing to house these missile units, especially if they guarantee an added U.S. military presence in their territory.

Above all, the biggest consequence from the demise of the INF would be that it could jeopardize New START, which limits strategic nuclear weapons and is arguably the most pivotal arms control agreement still in play between the United States and Russia. Signed in 2010, New START is set to expire in February 2021 unless the United States and Russia exercise an option to extend it to 2026. Currently, Moscow is interested in extending New START, and the treaty is also fairly uncontroversial in Washington. However, a messy breakup of the INF treaty, coupled with further arms buildups, could be a serious threat to New START's longevity—especially since certain hard-liners on arms control, such as Bolton, appear to be getting their way in the White House. The U.S. withdrawal from the Anti-Ballistic Missile treaty in 2002 already spiked tensions with Russia and China over U.S. anti-ballistic missile defenses. The potential collapse of both the INF and New START will all but ensure the resumption of a major arms race between the United States, China and Russia at all operational and strategic levels.

The U.S. Withdrawal From the INF Treaty Is the Next Step in a Global Arms Race is republished with the permission of Stratfor Worldview, a geopolitical intelligence and advisory firm.