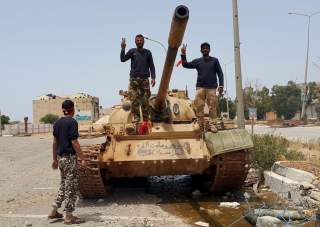 Key point: From a civil war to unending foreign intervention, Libya is struggling to survive. Is there hope for a country that has suffered so much bloodshed?

For the past nine years, Libya has ceased to be a sovereign country. The North African oil producer has lost its independence, sense of pride, and self-worth. It’s a country very much in the throes of a vicious civil war fueled by external powers who have no issue with using Libya to pursue their own interests. In Libya, everything from the oil industry to political authority is divided.

The civil conflict pitting the internationally-recognized government in Tripoli against Field Marshall Khalifa Hiftar’s eastern-based Libyan National Army has stretched for nearly six years without an end in sight.  Hiftar’s nearly year-long military offensive towards Tripoli has stalled, bringing militias ordinarily wary of each other in Libya’s west together in order to defend the capital.  A bloody stalemate has ensued, with drones dropping their payloads on civilian targets

Practically every outside power that has a thumb on the Libyan scale recognizes that neither side is able to triumph over the other militarily. Yet significant disagreement remains about how to resolve the conflict diplomatically. Russian President Vladimir Putin attempted to bring Libyan Prime Minister Fayez al-Sarraj and Hiftar together last week to sign a ceasefire, but Hiftar hurried out without putting his name on the agreement.

Last Sunday, German Chancellor Angela Merkel followed where Putin left off. Sarraj and Hiftar were invited to the conference, as were the major foreign powers who have repeatedly breached the U.N. arms embargo. Egypt, the United Arab Emirates, Russia, and France, Hiftar’s main backers, were represented, as were Saraj’s allies Turkey, Italy, and the European Union. The purpose of the conference in Merkel’s words was “getting all the parties...connected in any way with the Libya conflict to speak with one voice” in the hope that the combatants would understand that diplomacy needed to begin in earnest.  That message, of course, would be far more legitimate and sincere if half of the participants in Berlin weren’t flouting the embargo with reckless abandon and picking favorites.

The talks in Berlin, however, were more successful than the talks in Moscow. After four hours of discussions, those in attendance agreed on a six-page communique which aimed to freeze the frontlines in preparation for a comprehensive, Libyan political dialogue. According to the communique, the parties “unequivocally and fully respect” the U.N. Security Council Resolutions as it pertains to Libya, particularly the arms embargo set in place to take military solutions off the table. Monitoring provisions, including through air, land, and sea-based platforms, were to be strengthened to ensure violations of the embargo are spotted.  And a committee is to be established that would begin addressing the core disputes in the war.  In a small sign of positive news, Sarraj and Hiftar have already appointed their representatives. By the time the conference was over, the Europeans who organized it patted themselves on the back for a job well done and were cautiously optimistic that the worst in Libya was over.

Whether any of it sticks is another matter entirely.

For one, Sarraj and Hiftar were nowhere to be seen. While both were apprised of developments throughout the day, neither one could get himself to sit in the same room with the other. Merkel made this point clear; the two men despise each other. Sarraj believes Hiftar is an aggressor who seeks to storm Tripoli, impose a personalist military dictatorship in the mold of Muammar al-Qaddafi, and rule the country by fiat. Hiftar, meanwhile, considers Sarraj’s administrations in Tripoli as weak, lawless, and completely reliant on militias dominated by Islamic extremists.  The relationship is toxic, and regional powers have done nothing at all to address it.

Which brings us to the second point: as long as external players like the UAE, Egypt, and Turkey are committed to stringing this war along, no intra-Libya diplomacy will succeed.  While Moscow may be getting tired of the war and frustrated with Hiftar’s personality, Abu Dhabi hasn’t demonstrated much interest in de-escalation. The Egyptians look at Hiftar’s army of militias in the east and see them as the best bulwark against an Islamist-dominated government next-door.  Turkish President Recep Tayyip Erdogan, a hothead with delusions of grandeur, sees in Libya an opportunity to expand Turkish influence in North Africa, ink energy deals in the Mediterranean, and make Ankara a power-player in another theater of the Arab world.

Add a renegade Libyan general with a superiority complex to the mix and it’s obvious that no joint communique is strong enough to paper over these differences.  And the communique won’t mean anything if the implementation is lax, the monitoring is starved of resources, or enforcement is a joke.

The talks in Berlin are just a first step. For the Libyans, the statement is just another piece of paper.

For Europeans however, the conference represents a realization that Libya’s war can’t be ignored any longer. Whether Europe has the gravitas and attention span to act as enforcers of a Libyan ceasefire and (one hopes) political accord is still to be determined.

Daniel DePetris is a fellow at Defense Priorities, a foreign policy organization focused on promoting a realistic grand strategy to ensure American security and prosperity. This first appeared earlier in January 2020.