RIP SR-71 Blackbird: Why the Air Force Did Away with the Fastest Plane Ever 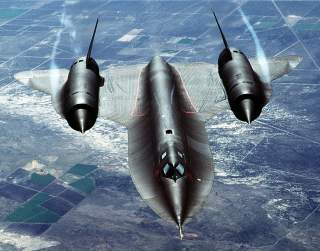 Both Welch and SAC commander General John Chain testified before Congress that the SR-71 should go, and so it did.

The SR-71, unofficially known as the Blackbird, was a long-range, advanced strategic reconnaissance aircraft developed from the Lockheed A-12 and YF-12A aircraft. The first flight of an SR-71 took place on Dec. 22, 1964, and the first SR-71 to enter service was delivered to the 4200th (later 9th) Strategic Reconnaissance Wing at Beale Air Force Base, Calif., in January 1966.

No SR-71 has ever been lost or damaged due to hostile action: in fact its incredible speed enabled it to gather intelligence in a matter of a few seconds while streaking across unfriendly skies. From 80,000 feet, it could survey 100,000 square miles of Earth’s surface per hour.

Despite the aircraft’s incredible flight characteristics, the U.S. Air Force (USAF) retired its fleet of SR-71s on Jan. 26, 1990, because of a decreasing defense budget, high costs of operation and availability of sophisticated spy satellites.

“General Larry Welch, the Air Force chief of staff, staged a one-man campaign on Capitol  Hill to kill the program entirely,” Ben Rich wrote in his book Skunk Works: A Personal Memoir of My Years of Lockheed. “General Welch thought sophisticated spy satellites made the SR-71 a disposable luxury. Welch had headed the Strategic Air Command and was partial to its priorities. He wanted to use SR-71 refurbishment funding for development of the B-2 bomber. He was quoted by columnist Rowland Evans as saying, ‘The Blackbird can’t fire a gun and doesn’t carry a bomb, and I don’t want it.’ Then the general went on the Hill and claimed to certain powerful committee chairmen that he could operate a wing of fifteen to twenty [F-15E] fighter-bombers with what it cost him to fly a single SR-71.That claim was bogus. So were claims by SAC generals that the SR-71 cost $400 million annually to run. The actual cost was about $260 million.”

Both Welch and SAC commander General John Chain testified before Congress that the SR-71 should go, and so it did.

As Rich so aptly reflected, “a general would always prefer commanding a large fleet of conventional fighters or bombers that provides high visibility and glory. By contrast, buying into Blackbird would mean deep secrecy, small numbers, and no limelight.”

Blackbird operations, except training flights, were officially terminated in November 1989, having been eliminated from the FY1990 Defense Department budget.

On Mar. 6, 1990, one Blackbird famously set a series of world speed records on its ‘retirement flight.’ The SR-71 with tail number 64-17972 was flown from California to the Smithsonian National Air & Space Museum (NASM) Udvar-Hazy Center at Dulles Airport, where it would eventually go on display. In the process, it set the official National Aeronautic Association coast-to-coast speed record of 2,086 miles in one hour and seven minutes, averaging 2,124.5 mph. It made the 311-mile St. Louis-to-Cincinnati leg in less than nine minutes, averaging 2,176.08 mph.

As told by Bill Yenne in his book Area 51 Black Jets, within a few months of this much-publicized flight, Saddam Hussein’s Iraqi army had occupied Kuwait and the U.S. was involved in the Desert Shield buildup that culminated in Operation Desert Storm in January and February 1991. During that conflict, many operational commanders, including General Norman Schwarzkopf, lamented the absence of expedited reconnaissance that the SR-71 might have contributed.

Mounting concerns about the situations in world trouble spots from the Middle East to North Korea led Congress to reconsider the reactivation of the SR-71. In 1993, Admiral Richard Macke, director of the joint staff for the Joint Chiefs of Staff, told Congress that “from the operator’s perspective, what I need is something that will not give me just a spot in time but will give me a track of what is happening. When we are trying to find out if the Serbs are taking arms, moving tanks or artillery into Bosnia, we can get a picture of them stacked up on the Serbian side of the bridge. We do not know whether they then went on to move across that bridge. We need the [reconnaissance information] that a tactical, an SR-71, a U-2, or an unmanned vehicle of some sort, will give us, in addition to, not in replacement of, the ability of the satellites to go around and check not only that spot but a lot of other spots around the world for us. It is the integration of strategic and tactical.”

In its FY1994 appropriations, Congress authorized a reinstatement of funding to permit a revival of part of the SR-71 fleet. By that time, many of the twenty surviving SR-71s were being prepped for museum displays, but at least a half dozen were in storage at Palmdale or flying research missions with NASA.

The USAF moved too slowly on the path to SR-71 reactivation, and in October 1997, using a line-item veto, President Bill Clinton deleted the funding. The Blackbird was permanently grounded by the US Air Force in 1998, leaving just two at NASA’s Dryden Flight Research Center at Edwards AFB.

One of the last NASA missions for the SR-71 was the Linear Aerospike SR-71 Experiment (LASRE) series conducted in 1997 and 1998. The object was to study aerodynamic performance of lifting bodies combined with aerospike engines such as would have been used in the Lockheed Martin Skunk Works X-33, the demonstrator for the conceptual VentureStar single-stage-to-orbit reusable spaceplane. The latter program was abandoned by NASA in 2001 but pursued by Lockheed Martin thereafter.

In signing off any discussion of the Blackbird’s demise, Americans are left with the words that Senator John Glenn spoke on the floor of the U.S. Senate on the day after the 1990 “retirement flight.”

Said the former astronaut, “The termination of the SR-71 was a grave mistake and could place our nation at a serious disadvantage in the event of a future crisis. Yesterday’s historic transcontinental flight was a sad memorial to our short-sighted policy in strategic aerial reconnaissance.”