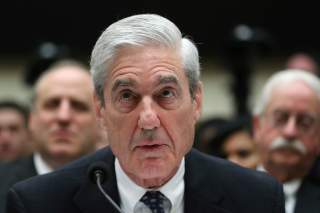 Mueller testified before two House committees and asked lawmakers to repeat themselves dozens of times, a move that resulted in a number of viewers following the testimony to call him “confused” and “shaky.”

“I will say that Mueller seems a little… shaky… particularly the House Permanent Select Committee on Intelligence could really hammer him this afternoon with some strong cross-examination on Volume 1 of the two-volume report, and I do wonder now how well he would handle it,” said Seth Abramson, a leading Russiagate conspiracy theorist who has staunchly defended the special counsel’s probe.

At one point, Republican Georgia Rep. Doug Collins asked Mueller if “conspiracy” and “collusion” are essentially the same thing.

“You are going to have to repeat that for me,” Mueller responded before saying they are not the same.

Collins pointed Mueller to his report, which read that collusion is “largely synonymous” with conspiracy. After a brief back-and-forth, Mueller said he would “leave it with the report.”

Mueller also said he was “not familiar” with Fusion GPS, the firm behind the Steele dossier.

“I’m not familiar with that,” Mueller responded.