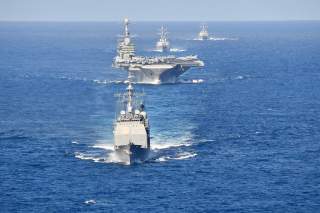 The waters of the South China Sea could soon be heating up once more. This week, the South China Morning Post reported that the United States and the Philippines discussed the placement of an upgraded High-Mobility Artillery Rocket System (HIMARS) in the contested body of water to defend against China's militarization of its artificial islands in the area. The report, however, said Washington and Manila failed to reach a deal because the Philippines cannot afford the "expensive" HIMARS.

The report comes amid continuing uncertainty about the countries' alliance under Philippine President Rodrigo Duterte's administration, as well as questions over whether Manila wishes to review the nations' 70-year-old Mutual Defense Treaty. Recently, the pair's defense chiefs reaffirmed their "enduring alliance" and agreed to increase the interoperability of their forces; at the same time, the United States also pledged to continue its support for the Philippine armed forces.

Earlier this week, the two countries also kicked off the Balikatan military exercises, which have featured new U.S. fighter jets, as well as greater participation from the Australian military and observers from Southeast Asia.

The discussion in question appears to have been limited to a U.S. push for the Philippines to purchase HIMARS units, yet it also opens the door to a possible break with U.S. policy. After all, any potential U.S. military deployment in the South China Sea — whether with HIMARS or something else — would go beyond the freedom of navigation operations the United States currently conducts in the area. By increasing its military presence, the United States would bolster the Philippines' maritime claims and perhaps deter China from making more inroads in the South China Sea — something that Washington's present operations in the waters are failing to do.

Any HIMARS deployment in the South China Sea would put China's artificial islands in the Spratly chain within striking distance. Given that such weapons could upend the balance on the waters, the Philippines (and other neighbors the United States could approach for a possible sale) are likely to consider the deployment of HIMARS units very carefully. Manila has balked at the price of the system, but such is Washington's desire to roll back Beijing that it could offer a discount to ease the Philippines' financial concerns. If Duterte's government ultimately agrees to deploy HIMARS units, it would also represent a major change in its own relationship with China, as Manila has recently been pursuing detente with Beijing and a soft response to China's militarization and greater assertivenessin the South China Sea.

The installation of HIMARS units or other U.S. weapons in the Spratlys could spark China to further weaponize its artificial islands and respond by harassing Philippine forces in the islands, especially their logistics and resupply operations. And if China believes the United States itself is preparing to deploy forces there, it could try to prevent Manila from preparing for their arrival by disrupting their construction operations. Doing so, however, could ratchet up tensions in the area, complicating Beijing's efforts to cultivate allies along its periphery to deflect U.S. pressure amid the two giants' great power competition.

China has been steadily increasing its military presence in the South China Sea in recent years. In 2012, China seized the Scarborough Shoal from the Philippines; it has also built seven artificial islands in the Spratly chain since 2013 and worked to prevent Vietnam and the Philippines from exploring for energy in areas it deems disputed. According to reports, China has installed anti-ship and surface-to-air missile systems on three artificial islands, including the Fiery Cross, Subi and Mischief reefs, and repeatedly rejected U.S. demands to remove the systems. With the United States pushing the Philippines to purchase a new rocket-launching system, a showdown in the shoals may be on the way.

U.S., Philippines: A Rocket Deal That Will Make Waves in the South China Sea is republished with the permission of Stratfor Worldview, a geopolitical intelligence and advisory firm.