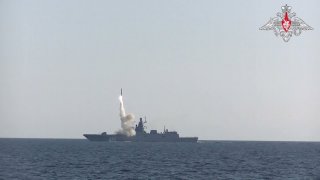 The Russian Ministry of Defense announced on Wednesday that it had conducted a successful test-launch of its Tsirkon (3M22 Zircon) hypersonic missile from the Northern Fleet’s frigate Admiral Gorshkov, the warship that has been used in numerous past tests of the platform. The missile hit its target in the White Sea.

“The recording equipment data show that the hypersonic missile’s flight complied with the designated parameters. The target was destroyed by a direct hit,” the ministry told TASS. “The Northern Fleet involved its surface ships and naval aviation to provide for the test-firings and close off the area.”

Russian defense minister Sergey Shoigu reported the successful launch directly to Russian Federation president Vladimir Putin, who has been a strong advocate of the Tsirkon. Earlier this month, he urged his country’s arms manufacturers to develop even more advanced hypersonic missiles as well as high-energy lasers to maintain Russia’s edge in military technologies.

“It’s particularly important to develop technologies for creating new hypersonic weapons, high-energy lasers and robotic complexes that would be capable of efficiently countering potential military threats and further strengthen the country’s security,” Putin said in a meeting with government officials.

A source in the Ministry of Defense had previously told TASS that the state trials of the Tsirkon hypersonic missile would begin in November and continue in December. Overall, five test launches against sea and coastal targets have been planned.

On August 24, 2021, a contract was signed with the Research and Production Association of Machine-Building at the Army 2021 international arms show on the delivery of Tsirkon hypersonic missiles to the Russian troops. The company’s CEO Alexander Leonov said at the time that the contract for the missiles would be fulfilled by 2025.

“The missile has been standardized and can be used both from surface ships and submarines. The only difference is in the launcher used on surface ships or submarines,” Leonov told reporters.

As previously reported, a statement from Russia’s Defense Ministry did not specify which Russian vessels would be equipped with the vaunted Tsirkon upgrade first. Yet, based on earlier reports sourced by statements from anonymous Russian defense industry insiders, the honor will likely go to Admiral Golovko, the third frigate of the Project 22350 Admiral Gorshkov class.

The Tsirkon is likely to eventually make its way to numerous warships in the Russia Navy’s fleet, including the Kirov-class battlecruisers Petr Velikiy and Admiral Nakhimov, as well as the modernized Admiral Grigorovich-class frigates and the Karakurt/Buyan/Gremyashchiy-class corvettes. The missile could further figure prominently into the offensive capabilities of Russia’s new Yasen-M class nuclear-powered cruise missile submarines, seven of which are expected to enter service through 2028.

The 3M22 Tsirkon (also known as “Zircon”) is a winged, anti-ship hypersonic cruise missile that is reportedly capable of reaching speeds of up to Mach 8-9 and maneuvering in mid-flight to evade enemy air defenses.