The Royal Navy on 31 Occasions in 2018 Intercepted Russian Warships 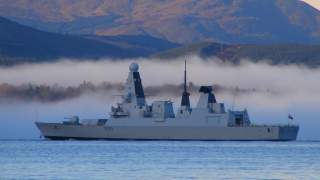 British warships last year sortied to intercept Russian vessels sailing near U.K. waters at a rate twice what it was in 2013, U.K. Defense Journal reported.

The period of heightened Russian naval activity roughly coincided with Russia’s annexation of Ukraine in 2014, the Russian intervention in Syria in 2015 and escalating tensions between Russia and NATO along the North Atlantic alliance’s eastern flank.

The sharp increase in Russian activity through 2018 occurred as the Royal Navy struggled to maintain a viable fleet.

But that bigger fleet still mostly exists on paper.

Of course, Russia also has struggled to maintain its fleet. More large ships are decommissioning and smaller vessels are taking their place, reshaping what was once a major global force into a new kind of regional fleet.

In April 2019 the Kremlin decided to dismantle rather than revamp two Cold War-vintage Kirov-class battlecruisers. Moscow likewise is considering scrapping its sole aircraft carrier Admiral Kuznetsov rather than pay for maintenance and upgrades.

The accidental sinking of the PD-50 drydock in October 2018 could weigh on the decision. PD-50 was the only drydock in northern Russia that could accommodate Kuznetsov.

The fleet’s transformation has been controversial in Russia. Paul Goble at the Jamestown Foundation in late April 2019 summarized the debate. “Capt. Konstantin Sivkov, the president of the Academy of Geopolitical Issues and a frequent critic of the government, for example, has argued that the Russian military maritime fleet today is in a horrific condition,” Goble wrote.

“The [surface] vessels that are really able to go to sea can be counted on one’s fingers,” Goble quoted Sivkov as saying.

Perhaps not coincidentally, there was just one U.K.-Russian naval encounter between January and March 2019. The destroyer HMS Defender shadowed the Russian frigate Admiral Gorshkov and three auxiliary ships. “Defender continued to track the group until they had left what the MoD described as the U.K.’s ‘area of national interest,’” U.K. Defense Journal explained.

It’s unclear whether the comparatively low number of interceptions so far in 2019 signals an overall slowdown in the pace of Russian deployments.