The Royal Navy and U.S. Navy Are Embracing Interchangeability: Could It Backfire? 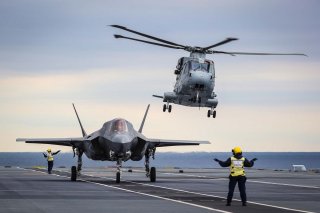 “Interoperability” is old and busted, proclaim top civilian and uniformed leaders from the U.S. Navy and Marine Corps and Great Britain’s Royal Navy. “Interchangeability” is the new hotness! Declares Admiral Mike Gilday, the U.S. chief of naval operations, the allied sea services intend to “synchronize pioneering capabilities, strengthen operating concepts and focus our collective efforts to deliver combined sea power together.” They will concentrate in particular on “carrier strike, underwater superiority, [and] Navy/Marine integration” while “doubling down on future warfighting like unmanned and artificial intelligence.”

In reality, the services have pursued interchangeability for some years now. Service chieftains merely codified what has been happening in practice and hung a catchy label on it. The initiative manifests itself most visibly in aircraft-carrier operations. After a decade’s lapse the Royal Navy has re-debuted in the world of fixed-wing naval aviation, putting to sea HMS Queen Elizabeth complete with a modest complement of F-35B stealth fighters. Queen Elizabeth recently took part in a NATO exercise off the Scottish coast, launching and recovering F-35s. During the maneuver, Captain Angus Essenhigh boasted that his ship was “equipped with the most fifth-generation strike power ever deployed at sea” in the form of sixteen joint strike fighters.

And indeed his boast was true.

Significantly, the bulk of the Queen Elizabeth F-35 contingent comes from VMFA-211, a U.S. Marine Corps squadron based in Yuma, Arizona. Ten jets from VMFA-211 joined six from the Royal Air Force’s 617 Squadron. (In a quirk of history, Britain’s air force, not navy, supplies aircraft to the fleet.) Marines will remain on board the vessel for its impending maiden deployment.

Making the jump from interoperability to interchangeability is a bigger deal than it might seem. The Pentagon defines interoperability as “the ability to act together coherently, effectively, and efficiently to achieve tactical, operational, and strategic objectives,” adding that it often involves the ability to exchange “information or services” by means of electronic communications. Generally speaking, that means unlike services are compatible enough technologically that they can communicate with one another and coordinate operations. There’s also a human dimension. A service needs to compile a working knowledge of its partners’ doctrine and tactics—and vice versa—if they are to fight together in unison.

Translated into operational terms, interoperability implies a modular approach whereby major units—ships, squadrons, fleets—work alongside major allied units. This is nothing new. We think of World War II in the Pacific as an exclusively American theater, but in reality the Royal Navy played a major part in the triumph over imperial Japan. NATO navies have long practiced multinational operations at sea, as have the U.S. and Japanese sea services, the U.S. and Royal Australian navies, and on and on. Standing arrangements typically perform best because partner forces get the most reps. Sometimes interoperable fleets come together on a pick-up basis, as when a coalition armada gathered in the Persian Gulf thirty years ago to help evict Saddam Hussein’s army from Kuwait.

Today it is far from uncommon for a carrier task force to venture seaward with a foreign picket ship to defend the flattop from air, missile, or subsurface attack. This August, for instance, the U.S. nuclear-powered carrier Ronald Reagan cruised in company with the Japan Maritime Self-Defense Force destroyer Ikazuchi in the Philippine Sea. Indeed, Japan’s surface fleet is organized into “escort flotillas” precisely to support U.S.-Japanese combat operations.

Still, it would be a mistake to interpret the initiative solely as a tactical and operational construct. Interchangeability has a political character—and the politics of interchangeability entails both opportunity and danger for the protagonists. First think about opportunity. Fusing fleets is not just a way to bolster operational acumen but to show that both allies have skin in the game of their common cause. Deploying a combined carrier task force announces that an attack on the task force is an attack on both allies—and that both allies will fight in concert to reverse or avenge aggression.

Much as stationing a tripwire U.S. Army brigade in Berlin put the Soviet bloc on notice that NATO would do battle should the encircled city come under assault, stationing a U.S. Marine squadron aboard Queen Elizabeth puts prospective foes such as China, Russia, and Iran on notice that the United States would fight should the Anglo-American task force come under assault. Interchangeability radiates a powerful diplomatic signal to would-be alliance-breakers. Confronting two great powers is a far different matter from confronting one. The tripwire effect could well deter mischief so long as allied governments remain steadfast about their common purposes.

Which brings us to the dangers. Even the closest of allies sometimes disagree over their goals. Or perhaps one ally cares more about some venture than the other and is disappointed at its partner’s seeming halfheartedness. Fissures in alliance relations can open. It’s natural. No alliance commitment is irrevocable. Even Article 5 of the North Atlantic Treaty, NATO’s founding charter, stops short of obliging all NATO members to automatically march off to war should a member come under attack.

Rather, Article 5 states that the parties to the alliance “agree that an armed attack against one or more of them in Europe or North America shall be considered an attack against them all.” If an armed attack does take place, each party pledges to take “forthwith, individually and in concert with the other Parties, such action as it deems necessary, including the use of armed force, to restore and maintain the security of the North Atlantic area” consistent with the UN Charter’s use-of-force provisions. Article 5 constitutes the gold standard for such compacts in that it binds alliance members to regard an attack on one as an attack on all. Still, there’s a fair amount of flex in promising only to take such action as one’s home government considers necessary to reply to aggression.

We promise to do what we see fit to do leaves open the possibility of troubles.

So the operational impact of intra-alliance quarrels could be profound if the Royal Navy and U.S. sea services mesh their forces too intimately in the coming months and years. A decision by London or Washington to abstain from some undertaking favored by its ally would subtract significant combat power from the combined fighting force—perhaps at a delicate time in an operation. For instance, Queen Elizabeth’s fighter/attack force would be debilitated should some feud unsettle transatlantic relations at present.

Commanders and their civilian masters on both sides of the Atlantic Ocean should think ahead about how to disentangle their forces in a hurry in case a diplomatic crisis looms. They should mix a trifle of skepticism into their enthusiasm for interchangeability and ask: what if?

That’s not to throw cold water on the initiative, far from it. The opportunity to field combined fighting forces appears more appealing than the peril appears menacing. Indeed, the U.S. sea services should seek out similar arrangements with other longstanding allies like the French Navy, not to mention Asian allies like the Japanese, South Korean, and Australian navies. The closer we come to a unified democratic armada to oppose the Chinas and Russias of the world, the better. But as Theodore Roosevelt observed a century ago, politics exhibits a kaleidoscopic quality—and kaleidoscopes can take unexpected turns.

It’s worth essaying some foresight about operational workarounds lest the Anglo-American special relationship swerve at a critical time—leaving a maritime service on either side of the Atlantic short on assets and manpower. And foresight is what strategic leadership is all about.

James Holmes is J. C. Wylie Chair of Maritime Strategy at the Naval War College and coauthor of Red Star over the Pacific, named to the Marine Corps Commandant’s Professional Reading List this week. The views voiced here are his alone.