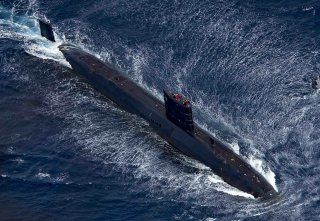 The Royal Navy's Commander Jonathan Lewis has been relieved of his command for throwing what amounted to a military version of a "booze cruise." Lewis, who was captain of the hunter-killer submarine HMS Trenchant, had thrown a party for his crew during a coronavirus lockdown after the boat reported to Devonport dockyard in Plymouth.

A video that was widely circulated on social media, showed the crew enjoying a barbecue and party – which was in violation of lockdown rules. The Trafalgar-class submarine had been at sea for months and was due to return on patrol after a short maintenance period. Despite the fact that the crew had effectively been isolated while at sea, the crew was to remain in isolation for an additional two weeks.

Lewis had been placed under "administrative investigation" over the concerns about his judgment.

Such incidents would normally be treated with a "slap on the wrist," but Commander Lewis had reportedly been advised by his senior officers onshore, as well as by some of his own officers on the submarine not to go ahead with the party, which included a barbecue and DJ set. Crew members were seen "swilling beer" on the sidings in the video. Reports suggested that techno music could be heard "miles away" while witnesses on shore described the scene as something akin to an "Ibiza beach party."

A senior defense source told the BBC that it was one of a number of instances that had undermined the trust and credibility of the captain's command.

However, it has been seen that the captain's actions were meant to raise morale after so long at sea, and a source told The Sun newspaper, "The Commander had little awareness of what was going on at home with the pandemic. But he was arrogant. It is very unlikely he will ever command the sub again."

Lewis was reportedly sent home on leave last week after what has been described as a "terse exchange" with his superiors, and his superiors expressed concern that he had countered orders not to have the party.

"We can confirm that the Commanding Officer of the HMS Trenchant has been removed from Command," said a statement from the Royal Navy.

Lewis had taken command of the nuclear-powered fleet submarine less than a year ago. He had previously been executive officer (XO) on another nuclear submarine that had been at the center of a drug scandal in 2017 when nine of the crew members tested positive for cocaine.

HMS Trenchant is one of just three nuclear-powered submarines in the Royal Navy. The boat, which was launched in 1986 and commissioned in 1989, had been scheduled to be decommissioned in 2019. Along with two U.S. Navy submarines, the Trenchant took part in the Ice Exercise (ICEX) 2018, a five-week biennial exercise that assesses operational readiness in the Arctic. It was the first time since 2007 that a Royal Navy submarine had participated in the exercises.