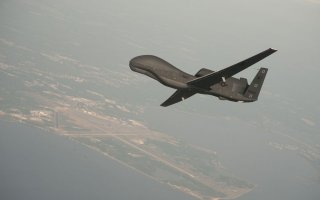 The U.S. Air Force’s RQ-4 Global Hawk drones will have a second life as “Range Hawks.” Block 20 and Block 30 Global Hawks will be converted for use in hypersonic missile testing.

The high-altitude, long-endurance Global Hawk drones have been in service since the days of Operation Iraqi Freedom. The drones have been flown extensively in Afghanistan and Iraq and have also been upgraded substantially over the years with higher-resolution, longer-range sensors and newer data processing technology. Latency has been greatly reduced as well in terms of sending real-time live video feeds to command and control stations. The drones offer a unique blend of endurance, range, surveillance cameras, and sensors.

The Air Force is now retiring some of the Block 20 variants and shifting them into a testing and training mode, in effect giving them a new purpose. Many of the Global Hawks are being delivered to Grand Sky Air Force Base in North Dakota.

“Today is not a retirement, but a graduation for the Global Hawk Block 20s,” Senator John Hoeven (R-N.D.) said in a press release. “These aircraft have the opportunity to continue playing an important role in our nation’s defense as Range Hawks, the aircraft we need to improve testing of our nation’s most advanced missiles.”

The main advantage to using Global Hawks for hypersonics weapons testing related to an increased ability to conduct testing and also perform tests in a fashion less observable to American adversaries. Using Global Hawks can allow for more testing than is currently possible, something which will expedite the delivery of hypersonic weapons.

“Currently, DoD uses an aging fleet of ships deployed across a Pacific Ocean corridor to test hypersonic missiles,” Hoeven’s press release said. “DoD is only able to conduct four to six tests per year, as it takes several weeks to deploy and position the ships for each test.”

The Grand Forks Sky Range program will replace the need to operate expensive ships for testing with modified Global Hawks which could “deploy quickly and increase testing capacity through the creation of additional testing corridors in the Pacific,” Hoeven’s release says.