The Ruger Super Redhawk: The Best Hunting Gun Ever? 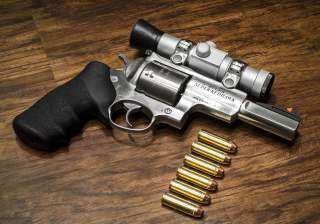 Key point: A good hunting handgun is important and you’ll want one that will last.

Today, we’re going to be reviewing the Ruger Super Redhawk, like the kind you can find here at Cabela’s.

Ruger is well-known for making revolvers that are incredibly durable and built like tanks, essentially designed to fire an unlimited number of full power Magnum rounds.

The Ruger Super Redhawk is no exception. Chambered for the some of the biggest handgun rounds such as .41 Magnum. .44 Magnum, .454 Casull, and .480 Ruger to name a few, the Super Redhawk is the epitome of a robust Magnum revolver that can be used for both hunting and defense against dangerous big game.

If you’re looking for a big Magnum revolver to take with you out into the woods, the Ruger Super Redhawk is certainly a viable option to consider. Let’s discuss more about this behemoth of a revolver and what it has to offer you:

The Birth of the Super Redhawk

The Super Redhawk was developed as an evolution of a previous Ruger .44 Magnum revolver called simply the Redhawk.

First introduced in 1980, the Redhawk was Ruger’s first Magnum double action revolver, and it was essentially a beefed up version of Ruger’s line of Security Six and Service Six revolvers, which were chambered for the .357 Magnum and .38 Special cartridges.

Before then, Ruger was producing a single action only Magnum revolver in the form of the Blackhawk, which is basically a larger and more robust version of the Colt Single Action Army (also known as the Peacemaker). The Blackhawk sold very well, but Smith & Wesson still dominated the Magnum handgun market with their Model 29 and 629 revolvers.

As a result, Ruger decided to compete directly with Smith & Wesson by manufacturing a double action/single action Magnum revolver of their own, and the result was the Redhawk. As with the Security Six and Service Six revolvers, the Redhawk had a one piece frame for superior durability (in contrast, most double action revolvers had a removable side plate).

The Redhawk was marketed exclusively to handgun hunters, was available in a variety of barrel lengths in either blued or stainless steel finishes, and became a major success for Ruger. In addition to being more durable, the Redhawk was priced below the Smith & Wesson 29, so those who wanted a brand new .44 Magnum revolver but couldn’t afford the Smith had the Ruger as an alternative.

However, within a few years Ruger decided to update their entire line of revolvers. The Security Six and Service Six revolvers were phased out in favor of the GP100, which was even beefier and designed to fire unlimited numbers of full power .357 Magnum rounds.

Today, both the Redhawk and the Super Redhawk revolvers are being sold by Ruger, along with the GP100 (whereas the Security Six and Service Six revolvers are no longer in production).

The Rise of the Super Redhawk

This extra steel in the Super Redhawk is noticeable when you look at it next to the original Redhawk side by side, and was a major selling point by Ruger in the marketing of the weapon.

The Super Redhawk is available in barrel lengths of 2.5 inches, 7.5 inches, and 9.5 inches. All Super Redhawks with the short 2.5 inch barrel are designated the ‘Super Redhawk Alaskan,’ and are designed chiefly for self-defense against aggressive big game animals such as brown bear. The shorter barrel of the Alaskan model means that it can be drawn from a holster and fired much faster than the models with the longer barrels, though at the expense of lesser bullet velocity and a much larger muzzle flash when the weapon is discharged.

Nonetheless, there’s no denying that the Super Redhawk is a far more robust weapon than the original Redhawk, and one of the most durable hunting revolvers available on the market today.

The Calibers of the Super Redhawk

The Ruger Super Redhawk is available in many different calibers today. The .44 Magnum is the most common caliber for the Super Redhawk, and was the original chambering for the gun when it was first introduced in 1987.

In 2003, Ruger introduced the Super Redhawk in .480 Ruger, which was a proprietary round designed by Ruger designed specifically for the Super Redhawk. The .480 Ruger is a handgun hunting rounds that has lower pressures than the .454, so it is more pleasurable to shoot while still offering significantly more power than either the .45 Long Colt or .44 Magnum rounds. Production of the .480 Super Redhawk temporarily ceased in 2007, but resumed again shortly afterwards.

In 2018, Ruger introduced the Super Redhawk in 10mm Auto. This model of the Super Redhawk has a 6.5 inch barrel and requires the use of moon clips to be cleanly ejected from the cylinder. If one loads 10mm rounds into the cylinder without the aid of moon clips, they will need to be manually (as is the case when loading any kind of semi-automatic pistol rounds into a revolver).

Are you on the market for a hunting revolver that can bring down the largest and most dangerous of North America’s big game?

If so, the Ruger Super Redhawk could be the gun that you are looking for. While there are competing revolvers from companies like Taurus and Smith & Wesson, there are simply no other big bore Magnum hunting revolvers on the market that can compete with the Super Redhawk when it comes to sheer durability.