Ruger's American Pistol: Better Than a Glock? Or a Waste of Time? 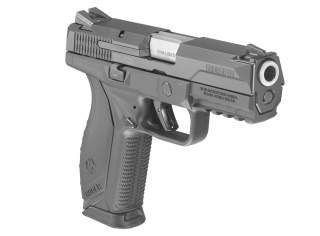 Key point: There are plenty more pistols that have lower MSRPs and have better features than the Ruger American.

Like many other firearm companies, Ruger decided to hop into the striker-fired polymer pistol market in the 2010s. In a confusing marketing move, they named their entry the “Ruger American,” probably hoping to build sales off of the good reputation of their line of Ruger American bolt-action rifles. But the Ruger American pistol debuted onto a crowded market.

One of the closest competitors to the Ruger American, coming in at an MSRP of $560 is the Austrian Steyr M9-A1. Another striker-fired pistol from Austria, the Steyr M9-A1 was the result of a collaboration between Steyr and Wilhelm Bubits, a former Glock consultant. The primary advantage of the M9-A1s lie in ergonomics. The pistol has a low bore axis, which reduces muzzle flip significantly. The grip is also shaped with a long beavertail and significantly undercut grip. Similar modifications have been seen on the Sig “X-series” grips and custom grip modifications for Glocks. Steyr also has a better reputation as a producer of military-grade arms than Ruger.

Beretta’s APX is also cheaper than the Ruger American at $575 MSRP. One of the Ruger American’s selling points is that it uses a “grip frame” system similar to the P320, where the grip can be easily changed in the event of damage or if the user wants to upgrade to a better shape. However, the APX also adds adjustable side panels to this system, making it more configurable than the Ruger American. The APX also is made by Beretta, which also has extensive experience producing pistols for military contracts.

However, the best Ruger American alternative is probably the Czech CZ P-10F, with an MSRP of only $524. The P-10F carries over the popular CZ ergonomics from their line of hammer fired pistols. It also has a magazine capacity of nineteen rounds—two rounds more than the Ruger American. The CZ is also notable for having a very good trigger, whereas most reviews place the trigger of the Ruger American as mediocre at best.

There are plenty more pistols that have lower MSRPs and have better features than the Ruger American. To add insult to injury, Ruger appears to have abandoned the pistol developmentally, not updating it significantly since its release in 2015. Red dots on pistols are in high demand, and of the pistols above, both the Beretta APX and CZ P-10F come in optic ready versions. Moreover, the P-10F optic ready is only priced at $590, only slightly above the Ruger American.

Finally, the Ruger American’s factory tritium night-sight option is listed on the website as “only available for law enforcement,” meaning if the consumer wants to upgrade to night sights, they will have to spend extra on buying night sights and then again when getting them installed. Given that practically every other handgun on the market comes with factory tritium night sights as an option, putting them as a “LE only” option is an odd decision by Ruger.

However, as American police departments move from .40 S&W to 9mm, following the lead of the FBI and many other federal law enforcement agencies, a massive flood of police-trade in pistols have been hitting the American gun market. Most of these guns have been shot very little but carried a lot. Priced around $300-350, these handguns can come from top-tier manufacturers like H&K, Glock, and Sig. While .40 caliber guns are definitely harder to shoot, a used .40 caliber Glock is probably a better duty firearm than a new 9mm Ruger American.