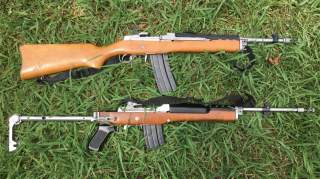 Key point: Neither as accurate or popular as the AR-15, but it has a storied history.