Ruger's Pistol Caliber Carbine Is Receiving Strong Marks, And We Know Why 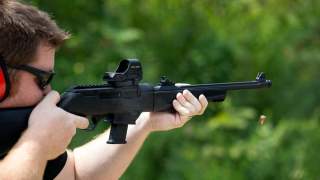 Key point: The owner of a Glock pistol and PC Carbine can own a common set of magazines.

Once upon a time, there was a niche for a rifle that was shorter than traditional rifles, making it handier and easier to travel with. Preferred by the likes of cavalrymen, stagecoach guards, and gold and silver prospectors, the carbine sacrificed range for portability. Ruger’s new Pistol Caliber Carbine (PC Carbine) is an excellent example of a compact, firearm that can be packed at home in a backpack, the back of a truck, or anywhere space is limited, ready to provide protection, hunting small game, or impromptu target practice.

In the latter part of the nineteenth-century carbines were popular sidearms for both soldiers and civilians alike. The U.S. government bought tens of thousands of carbines for horse-mounted cavalry troops who preferred a shorter barrel gun that was easier to manipulate on horseback. Guns such as the Spencer, Warner, Palmer and Sharps carbines continued to be popular after the war. Although carbines fell out of favor for years they’re currently experiencing a resurgence, led by the civilian side of the AR platform which typically has a barrel length of sixteen inches. Americans are buying carbines again.

Sturm Ruger and Company has traditionally been one of the few companies producing modern-day carbines. The company has sold the Mini-14—a scaled down version of the M-14 service rifle in semi automatic form since 1973—in both .223 and 7.62x39 caliber. The Ruger 10/22, likely the company’s most successful gun ever, combines a short eighteen-inch barrel with a ten-round detachable .22 long rifle cylinder magazine. (The company sold a .44 Magnum carbine based on the 10/22 but it was not a commercial success.)

Ruger’s latest carbine offering is the PC Carbine. Introduced this year at the annual SHOT Show, the PC Carbine combines several desirable features into a firearm with appeal to a large swath of gun enthusiasts. Less than three feet long and capable of accepting pistol magazines and ammunition, the carbine promises to be a groundbreaking new product.

The PC Carbine is outwardly similar to the company’s 10/22 takedown rifle, which can be quickly disassembled into two pieces for travel. The thirty-four-inch long PC Carbine has a 16.12-inch barrel and like the 10/22, a quick twist will separate the PC Carbine into two separate pieces, the stock and receiver and the barrel and forearm. The result is a disassembled weapon less than twenty-inches long, storable in places like backpacks, behind the seat of a pickup truck, or anywhere space is at a premium. It is important to note that disassembled the weapon is unable to fire.

The PC Carbine’s great advantage is that it fires 9mm pistol ammunition. 9mm is affordable, with inexpensive plinking ammunition averaging about fifteen cents a round. 9mm ammunition is also an effective self-defense round, can take down smaller game and is an enjoyable round to shoot in general. Another great advantage of using a pistol caliber: most indoor gun ranges, which are more common and often more accessible than outdoor ranges, will allow shooters to shoot the PC Carbine at their facility.

In addition to being a takedown, the PC Carbine’s cold hammer forged, chrome-moly barrel is heavier than usual, a feature that will preserve accuracy despite the heat buildup from an afternoon’s shooting. The heavy barrel profile should keep shooters on target despite shooting dozens of rounds in quick succession, and is fluted to save weight. Most PC Carbine models also come with a threaded barrel that can accommodate a compensator, muzzle brake, flash hider or screw on a legal suppressor.

The PC Carbine has built-in ghost ring sights, featuring a single blade post on the barrel tip and a peep sight located at the barrel base. The combination of a 9mm round and sixteen-inch barrel yields a maximum effective range against man-size targets of about 100 yards, and in target shooting about 200 yards. To facilitate longer range shots, a full length Picatinny rail runs along the top of the receiver for the addition of telescopic, red dot or holographic sights. The PC Carbine also has another rail under the barrel for attaching lights or lasers useful in self-defense situations.

Perhaps the most interesting aspect of the PC Carbine is a nod to a completely different gun company—Glock. The PC Carbine, in addition to accepting Ruger 9mm pistol magazines, will also accept Glock magazines. Glock’s market share of the 9mm pistol market is significantly larger than Ruger’s, and the ability for gun owners to use magazines they already own is a significant bonus. The Glock aftermarket magazine market is also more developed than that for Ruger pistols. A gun owner with a Glock pistol and a PC Carbine can own a common set of magazines.

The PC Carbine is still very new to the market but is attracting strong reviews. Initial customer impressions are good, and for a first generation firearm it has few if any consistent issues. Compact, reliable and with decent stopping power, the PC Carbine could be on gun store shelves for a long time to come.

Kyle Mizokami is a defense and national security writer based in San Francisco who has appeared in the Diplomat, Foreign Policy, War is Boring and the Daily Beast. In 2009 he cofounded the defense and security blog Japan Security Watch. You can follow him on Twitter: @KyleMizokami. This piece was originally featured in November 2019 and is being republished due to reader's interest.