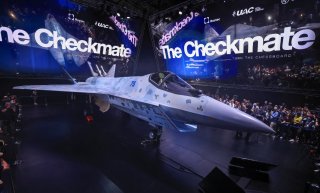 Russian aircraft manufacturer Sukhoi, a subsidiary of industrial conglomerate Rostec, introduced a new fighter, dubbed “Checkmate,” at the 2021 edition of the biennial Russian MAKS Airshow. The reveal followed what is perhaps the most sophisticated mass-marketing campaign of any Russian military hardware product, replete with multiple teasers and promotional videos, slick chess iconography, a dedicated splash page with a countdown timer, and a healthy dose of Twitter trolling.

According to the MAKS presentation and details provided by Rostec officials, the plane boasts a top speed of 1,900 kilometers per hour, an operational radius of 3,000 km, or a combat radius of 1,500 km. The fighter is widely believed to be powered by Russia’s long-anticipated Izdeliye 30 engine, and boasts a modern glass cockpit with a broadly similar layout to that of Russia’s Su-57 fifth-generation fighter. The plane apparently comes with short takeoff and landing capability in its base configuration and also sports the artificial intelligence-powered “Matryoshka” logistic support system for streamlined repair and maintenance routines. In keeping with its multirole purpose, the fighter boasts a large and flexible armament suite with a payload capacity of upwards of seven tons. Checkmate’s weapons complement includes the RVV-MD and RVV-SD medium- and short-range air-to-air missiles, air-to-surface missiles from the GROM family, a robust catalog of guided and unguided bombs, rockets from the S-series, and more. The Checkmate can carry up to five air-to-air missiles in its internal weapons bays while deployed in its stealth configuration, or a mixture of weapons in internal and external bays to maximize its payload delivery potential for missions that do not require stealth.

In light of the design lessons of the Su-57 and the painful fifth-generation experiences of some foreign competitors, the manufacturer appeared to take steps to ensure that the plane is not over-engineered. Instead, Sukhoi offers a fairly chaste, base Checkmate package that can be further customized by foreign customers seeking specific modifications or enhancements. There is also a two-seater Checkmate variant in the works, as well as a rumored unmanned version.

At a flyaway cost of $25–30 million, the Checkmate is incredibly competitively priced. This will help the fighter achieve its raison d'être as an export product, aggressively positioned to compete with foreign offerings like the JAS-39 Gripen and Dassault Rafale. There is, however, a caveat when it comes to pricing: $25–30 million could simply be the starting point prior to customer-specific modifications that may further drive up the price. Additional pricing information is sure to be revealed as the first export contracts are signed, though there currently do not appear to be takers. “No,” said Director of the Federal Service for Military-Technical Cooperation Dmitry Shugayev, when asked last week during the Eastern Economic Forum if Moscow has received any procurement requests for the new fighter.

Russian officials previously said that the Checkmate is targeted at African markets, as well as India and Vietnam. The fighter is scheduled to make its maiden flight in 2023 and to enter serial production in 2026.