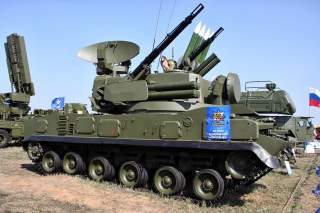 The Tunguska, a tracked armored vehicle armed with both short-range anti-aircraft missiles and anti-aircraft cannon, will get passive thermal and optical sensors that will enable it to detect aircraft and drones without disclosing its position by emitting radar beams.

“Thanks to the introduction of television and thermal imaging channels with an automatic target tracking system, Tunguska-M1 will able at any time of the day to ‘see’ and destroy the enemy in stealth mode, without revealing itself,” according to Russian newspaper Rossiyskaya Gazeta.

The 2S6, which originally saw service in the Soviet Army beginning in 1982, is a curious-looking vehicle. The turret has twin 30-millimeter cannon, plus eight surface-to-air missiles, with four mounted on either side of the turret. The 35-ton vehicle has a four-man crew and can reach a highway speed of 40 miles per hour.

“It is believed that this anti-aircraft self-propelled gun is still the best in the world,” proclaims Rossiyskaya Gazeta. All foreign attempts to create a war machine equivalent to it ended in failure.”

That’s not exactly true. A rough U.S. equivalent of the Tunguska is the M6 Bradley Linebacker, a variant of the infantry fighting vehicle that retains the 25-millimeter cannon, but replaces the TOW anti-tank missile replaced with Stinger anti-aircraft missiles. But unlike Russia, the U.S. Army has slashed its mobile air defense forces, and the Linebacker has been retired.

That just leaves the AN/TWQ-1 Avenger as the U.S. military’s only mobile air defense system. It is a Humvee with a turret mounted on the back, comprising two four-missile Stinger launchers plus a .50-caliber machine gun. That makes it less well-armed than the Tunguska. But more important, the Avenger is not an armored vehicle. The Tunguska is not heavily armored, but it has enough protection and mobility to keep up with mechanized forces on the battlefield.

Now the U.S. Army is considering whether to bring back the Linebacker. Perhaps the 21st Century version might be armed with exotic weapons such as lasers, which several nations are developing as a means to shoot down drones.

The Tunguska, and its cousin the truck-mounted Pantsir gun-missile system, have generated more buzz after the Iranian-led attack on Saudi Arabian oil facilities in September 2019. The sites were heavily damaged by a simultaneous salvo at least 18 low-flying drones and cruise missiles. None were intercepted by Saudi Arabia’s six battalions of American-made Patriot air defense systems, which are optimized more for destroying ballistic missiles and manned aircraft. This had led to speculation that a hybrid system like Tunguska, armed with short-range air defense missiles and cannon, might provide better protection against low-altitude drones.

On the other hand, there are reports that the Pantsir, at least, didn’t perform very well in stopping drone attacks launched by Syrian rebels. Russia may have a leg up over America in mobile air defense, but the drones may yet have the last laugh.