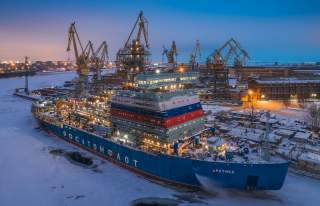 The first in the Russian government’s new class of nuclear-powered icebreakers has begun trials on the Gulf of Finland.

Arktika is 568 feet long, making her the largest icebreaker in the world. Her two RITM-200 reactors each produce 175 megawatts. Russia plans to build five of the vessels, adding to and partially supplanting the current force of six heavy icebreakers.

Initial trials are taking place with idle reactors, according to Vyacheslav Ruksha, the head of Russia’s Northern Sea Route Directorate. The vessel instead will be powered by her backup generators.

The icebreaker in coming weeks will sail around Scandinavia to her homeport in Murmansk, The Barents Observer reported. A second trial, presumably with active reactors, is slated for spring 2020.

The ship eventually will break ice from the Kara Sea and east along the Northern Sea Route. Two other icebreakers in the class are under construction in St. Petersburg and could commission in 2021 and 2022. Construction has yet to begin on the fourth and fifth ships in the class.