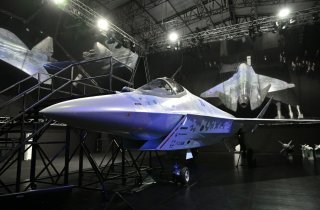 Next week, Sukhoi’s newest stealth fighter, dubbed the “Checkmate”, will be unveiled to the public at Russia’s Aviation and Space Show (MAKS). The air show will take place at the Ramenskoye airfield, roughly twenty miles from Moscow. Russian president Vladimir Putin is expected to attend.

One of the most awaited attractions of the air show is the Checkmate, which was put under display. Initial photographs of the plane had it bundled within a tarp. Russian defense conglomerate Rostec shared one such photo with an indecent caption written underneath.

The tarp has since been removed, and the plane’s appearance revealed. The aircraft on display is likely a mock-up of the real plane rather than the plane itself, and many questions remain as to the aircraft’s capabilities, but from the pictures, it is possible to roughly estimate the plane’s design and capabilities.

At its most basic, the aircraft is a single-engine jet with a delta wing. It has internal weapons bays and V-shaped tail control surfaces, helping to lower its radar cross-section and make it more difficult to detect.

One of the more interesting features of the Checkmate is its chin inlet, which helps to control the flow of air to the jet turbine and improves performance at the expense of speed. The inlet also dramatically expands its radar cross-section, especially from the front. However, designs for more radar-friendly chin inlets have been used in the past, notably on the Eurofighter Typhoon.

Other planes with chin inlets include the F-16 Fighting Falcon, the aforementioned Typhoon and the Chinese Chengdu J-10.

What is certain, however, is that the Checkmate was designed not only to meet Russian needs but the desires of foreign arms purchasers in need of advanced attack aircraft. One of the mainstays of Russia’s aviation program has been its ability to export jets competitively with the United States. Potential Checkmate customers that Russia is eyeing include Argentina, the United Arab Emirates, and India.

However, the plane will certainly play a role within the expanding Russian Air Force, too—most likely as a lighter complement to the heavier and more durable Sukhoi Su-57s.