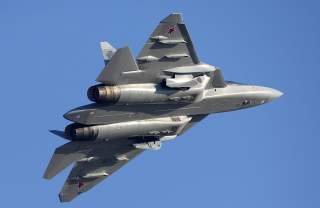 Russia appears to be developing a new, small air-to-air missile that could arm the Su-57 stealth fighter. The United States also is working on smaller air-to-air missiles to arm its own growing force of radar-evading warplanes.

The new missile appeared in a display at munitions-maker Vympel NPO's I. I. Toropov design facility in Moscow on Nov. 18, 2019, The War Zone reporter Joe Trevithick noted.

The missile, the designation of which is not public, appears to be derived from the medium-range R-77-series missile, Trevithick explained. “However, it is significantly shorter than any of the variants in that family, as well as the R-74 and K-74M dogfighting missiles.”

“This form factor seems ideally suited to meet space limitations of the small bays located under each of the wing roots of the Su-57 advanced combat aircraft,” Trevithick added.

There’s growing demand among operators of stealth fighters for smaller missiles. Stealth jets such as the F-22, F-35 and Su-57 feature internal weapons bays that help to minimize the planes’ radar signatures. The size of the bays limits which weapons, and how many of them, the fighters can carry.

The Pentagon is developing at least two new, small air-to-air missiles -- Peregrine and Cuda. The lack of internal space on the F-35 is driving the requirement for these and similar munitions.

The F-35 famously can fit just two radar-guided AIM-120 Advanced Medium-Range Air-to-Air Missiles, or AMRAAMS, in its belly bay. In full stealth mode, with all its munitions tucked into the bay, the F-35 gets just two shots at enemy fighters before it must resort to dogfighting with its internal cannon. The F-35 is a notoriously poor dogfighter.

Smaller missiles could solve that problem. Raytheon claimed Peregrine, which is six feet long and weighs 150 pounds, will have the same range as a 12-feet-long, 345-pound AMRAAM and maneuverability matching the 10-feet-long, 190-pound AIM-9 Sidewinder heat-seaking missile.

"Peregrine will allow U.S. and allied fighter pilots to carry more missiles into battle to maintain air dominance," Dr. Thomas Bussing, the vice president of Raytheon Advanced Missile Systems, said in a statement. "With its advanced sensor, guidance and propulsion systems packed into a much smaller airframe, this new weapon represents a significant leap forward in air-to-air missile development."

Lockheed’s Cuda is similar to Peregrine. At six feet in length, Cuda double or triple the loadout of F-22s and F-35s, Lockheed claimed. Relying in part on kinetic energy for its destructive potential allows Cuda to be smaller than is some traditional missile that solely counts on an explosive warhead.

"Cuda is a highly lethal interceptor that defeats targets by direct body-to-body impact," Lockheed told Flight Global. "At impact, Cuda sweeps its mass directly through the target at a selected point of vulnerability."

The wingman-drone initiative is moving in concert with new missile-development. The Air Force Research Laboratory’s Skyborg program is developing the artificial intelligence for the wider wingman-drone effort. To develop the hardware, AFRL is experimenting with three copies of the subsonic XQ-58.

The Air Force in November 2019 designated Skyborg as one of its first three “vanguard” research programs that together will account for a fifth of the service’s science spending.

The Air Force wants an early version of a wingman drone to be ready for combat by 2023. It’s unclear whether the new, small missiles will be ready by then.

It’s worth noting that Russia is working on its own wingman drone. If and when it ever enters service, the Hunter-B drone will need small munitions, too.