Russia’s Quest To Make Itself Indispensable in the Middle East 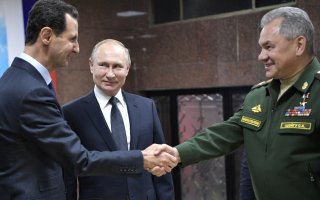 Although it has neither the desire nor the financial or military capacity to actually displace the United States in the Middle East, Russia has become adept at planting itself firmly in the middle of crises and conflicts and establishing itself as an indispensable intermediary at relatively little cost. This has been most visible in Syria and Libya, where Russia and other regional powers manage the complicated political and military dynamics while the US focuses on counterterrorism operations.

Less often discussed, however, are Russia’s attempts to become a key player in both the Israeli–Palestinian conflict and Lebanon. Recent developments in both arenas may well give Russia the space to finally make itself a vital fixture.

The successful Russian intervention in Syria in 2015 is ground zero for Moscow’s ever-expanding presence. Coinciding with abortive US attempts to form an alliance with Russia against jihadist groups in Syria in September 2016—a deal that implicitly guaranteed Bashar al-Assad’s continued rule and allowed Russia to turn its attention elsewhere—Russian President Vladimir Putin offered to host a summit in Moscow between Palestinian Authority President Mahmoud Abbas and Israeli Prime Minister Benjamin Netanyahu.

Relations between the Palestinians and Russians picked up dramatically, however, following US President Donald Trump’s recognition of Jerusalem as Israel’s capital in December 2017, which led the Palestinian Authority to cut off all contacts with the US, including security ties with the CIA. Abbas himself led a high-ranking delegation to Russia in early 2018 to discuss a new multilateral format for Israeli–Palestinian negotiations with Russia at its centre.

In 2018, Russia also began meeting directly for the first time with Palestinian Islamic Jihad, an Iranian proxy it once reportedly considered a terrorist group. Direct contact with Hamas, which Russia never considered a terrorist group, also increased, culminating in an intra-Palestinian summit involving all factions in Gaza and the West Bank, including the Palestinian Authority, in February 2019. Although Russia failed to get Hamas and Islamic Jihad to sign up to its ‘Moscow declaration’, which was intended to push back against US announcements, close consultation with all the Palestinian factions continued, with Russia pressing them to unite under the political program of the Palestine Liberation Organization.

While that goal is likely impossible, Russia did manage in a phone call in July 2020 to persuade Jibril Rajoub, secretary-general of the Fatah Central Committee, to hold a joint videoconference with Hamas to present a united front. Since late August, Russia has consulted almost daily with senior Palestinian leaders from several major groups, culminating in a 3 September videoconference between the 14 major factions. Both before and especially since the videoconference, Russia has been pushing all the factions to attend another pan-Palestinian summit in Moscow to help nudge unity efforts along.

On the centrality of Russia to the Israeli–Palestinian conflict, at least, the factions are already united. Senior Hamas official Moussa Abu Marzuk stated in July 2019 that only Russia could help the Palestinians against the US, while Palestinian Foreign Minister Riyad al-Maliki said in June this year, ‘We trust President Vladimir Putin … Palestine is willing to have talks with Israel via video conferencing and under Russian auspices.’

Russia’s growing presence in Lebanon flows out of its intervention in Syria, with which Lebanon has been inextricably entwined for decades. A 2019 investigative report by Novaya Gazeta found that a business jet associated with Yevgeny Prigozhin—the nominal owner of ‘Wagner’ mercenaries who are fully controlled by the Russian military intelligence agency GRU—had been making monthly flights to Beirut since at least December 2016. From there they would fly to various Wagner theatres of operation in Syria and Africa. Coupled with claims that GRU chief Igor Sergun’s sudden death in January 2016 occurred in Lebanon and not in Moscow, there’s circumstantial evidence to suggest Beirut is an operational centre of Russian activity in the Middle East.

Russian attempts to become a major political player in Lebanon mostly failed until late 2018, when Lebanon accepted an important, if symbolic, US$5 million in Russian military aid. Although Moscow has thus far been unable to get a Lebanese signature on a draft military agreement, the two sides have since 2019 grown closer politically and Russia has become more active in Lebanon’s energy sector.

Yet, until the recent explosion in Beirut and subsequent resignation of the government, Russia was simply not a significant actor in Lebanon. The political vacuum that has now developed, and Moscow’s close relations with all sides, may have opened a door for Russian influence in Lebanese politics. For instance, on 17 August, former Lebanese prime minister Saad Hariri sent an adviser to consult with Putin’s Middle East envoy Mikhael Bogdanov on future political developments in the country. Bogdanov also had phone conversations with Hariri, Druze powerbroker Walid Jumblatt and the Free Patriotic Movement’s Gebran Bassil, and met in Moscow with Lebanon’s ambassador to Russia and with an adviser to Lebanese President Michel Aoun, with final consultations taking place on 27 August.  A new prime minister, Mustapha Adib, was designated on 31 August, though the actual future of the government is still unknown.

It is unclear whether the crushing US sanctions on both Iran and the Assad regime, which necessarily have an impact on Lebanon, along with severe international pressure for reform, will hinder or help Moscow’s influence. What will certainly help it, though, is its increasingly close partnership with France, which has taken the lead role in Lebanon after the Beirut explosion across a spectrum of political and military issues, as well as its alliance with Iran, Syria and Hezbollah, the most relevant actors in the country.

As Lebanon sets out to rebuild its capital, Russia, the only country to maintain close relations with every state and non-state actor involved, could become supreme arbiter as it effectively has in Syria and Libya.

Oved Lobel is a policy analyst at the Australia/Israel & Jewish Affairs Council.