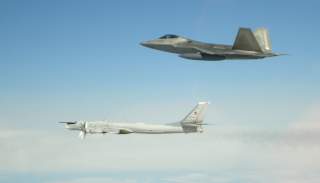 Six Russian Tu-95 heavy bombers and several Russian Su-35 fighters probed U.S. air-defenses on May 20 and May 21, 2019, prolonging a period of aerial tension between the Moscow and Washington.

“Two pairs of F-22s and an E-3 airborne early warning and control system from North American Aerospace Defense Command positively identified and intercepted a total of four Tupolev Tu-95 bombers and two Su-35 fighters entering the Alaskan Air Defense Identification Zone on May 20,” noted the command, which also is known by its Cold War acronym “NORAD.”

“Specifically, two of the Russian bombers were intercepted by two F-22s, and a second group of bombers with Su-35 fighters was intercepted later by two additional F-22s, while the E-3 provided overall surveillance.”

Incursions the next day followed a similar pattern. “Two pairs of F-22 fighter jets, each with an E-3 airborne early warning and control system aircraft, from the North American Aerospace Defense Command positively identified and intercepted Russian Tu-95 bombers and Su-35 fighter jets entering the Alaskan Air Defense Identification Zone on May 21,” according to the air-defense command.

“Specifically, two Russian bombers entered the ADIZ and were intercepted by two F-22s while an E-3 provided overall command and control. The bombers exited and then re-entered the Alaskan ADIZ accompanied by two Su-35 fighter jets. NORAD committed an additional two F-22s and E-3 to relieve the initial intercept aircraft. A KC-135 air-to-air refueling aircraft supported both of NORAD’s intercept teams.”

Russian incursions in recent months have been more frequent than average. “NORAD has intercepted an average of approximately six to seven Russian sorties [annually] entering its ADIZ since Russia resumed long-range aviation patrols in 2007,” the command explained.

“This is the fourth and fifth intercepts this year and the second day in a row that Russian bombers have flown into the Alaskan ADIZ.”

NORAD urged the public not to worry. The command “employs a layered defense network of radars, satellites and fighter aircraft to identify aircraft and determine the appropriate response. The identification and monitoring of aircraft entering a US or Canadian ADIZ demonstrates how NORAD executes its aerospace warning and aerospace control missions for the United States and Canada.”

The U.S. Air Force in early March 2019 deployed five B-52 bombers from Barksdale Air Force Base in Louisiana to the United Kingdom. Some of the B-52s flew mock nuclear attacks on Russian soil.

"Though the Air Force has regularly sent small detachments of B-52s to the United Kingdom for training exercises throughout Europe over the years, having six of the bombers there at once is the single largest deployment of the [B-52s] to the region since the invasion of Iraq in 2003," Trevithick continued, citing Military.com.

The next time a Russian bomber appears near the U.S. coast, remember that American bombers are just as likely to appear off the Russian coast. Mutual displays of aerial might by nuclear-capable warplanes is a routine, if chilling, fact of life for the United States and Russia.