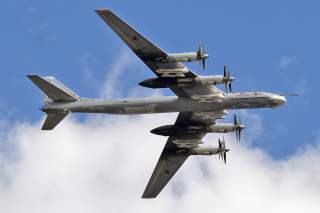 The 1950s and 1960s were the United States’ and Soviet Union’s nuclear heyday. Unlocking the power of the atom was supposed to usher in a new era in human achievement. In many ways, it did—harnessing nuclear power offered nearly unlimited energy to countries in the exclusive nuclear club.

But could the nuclear age transform aviation as well? The United States and USSR certainly thought so. Meet the Tu-95LAL and the Convair NB-36H— both of which carried onboard nuclear reactors.

In the early days of the Cold War before ICBMs and nuclear-powered submarines, American and Soviet nuclear preparedness was extremely high. Both countries had nuclear-armed bombers in the sky around the clock, waiting to deliver their payloads on Moscow and Washington. Keeping bombers constantly in-air required lots of support infrastructure and forward planning—and lots of refueling, which limited bomber’s range and endurance.

Aircraft powered by nuclear reactors could, in theory, remain in the sky for weeks or possibly months without needing to refuel. Their only limitations would be food, water, and pilot endurance. The idea was seemingly straightforward: use existing aircraft designs and modify them to be powered not by conventional means, but by nuclear power.

American and Soviet engineers faced several complex design problems. First, how exactly would nuclear propulsion work? Surprisingly similar to any other kind of aircraft. Of crucial importance would be the massive amount of thermal energy a nuclear reactor creates.

First, a simplified explanation of jet engines: during normal flight, air enters a jet engine, where it is compressed, injected with fuel, and ignited. This creates a controlled explosion that is forced rearward, creating thrust and pushing the aircraft forward.

The United States and USSR both needed huge aircraft that could transport prodigious payloads, capable of housing heavy reactors within their bomb bays.

In 1961, Soviet aircraft designers decided on their platform of choice, a modified Tupolev Tu-95. The Tu-95’s first flight was ten years previous, in 1951. The strategic nuclear bomber is enormous and continues to fly today, roughly analogous to the United States’ venerable B-52 strategic bomber.

The Tu-95 has extreme endurance and can carry a large bomb load, perfect for hauling a nuclear reactor. It has several design features not often seen on other aircraft. Not only is it propeller-driven, but the four engines each have a set of contra-rotating propellers.

In the United States, nuclear-powered aviation testing began earlier in 1955. Their test platform was a modified Convair B-36. The B-36 was truly a beast—the B-36 had the longest wingspan of any operational military aircraft ever built.

The B-36 sported a whopping six engines, arranged in a pusher configuration with the propellers located behind the wings. The hollow wing roots were over seven feet thick to provide additional space for fuel for transcontinental flight. Some of the later B-36D models were even fitted with two sets of side-by-side jet engines for short bursts of higher performance, which brought the engine count to ten.

No Risk, No Fun

Design challenges were prodigious, but not insurmountable. The biggest design consideration was Acute Radiation Syndrome—radiation poisoning that the crew would need protection from.

The Americans installed a four-ton lead disk in the middle of the B-36 fuselage to reduce the crew’s radiation exposure. The 5-man flight crew were stationed in the plane’s cockpit, which was encased in lead. The cockpit windows were switched out for foot-thick lead glass as an extra precaution. The modified Tu-95 also had similar shielding installed.

During their lifespans, both the American and Soviet experiments left the drawing board, but were rather unimpressive in the air. Besides the success of flying with a nuclear reactor onboard, the biggest concern was for the safety of the pilots and crew. Therefore most flights were thankfully reactor-off journeys.

For what they were, both programs enjoyed a certain degree of success. Both had installed a functional nuclear reactor into a large bomber, and conducted test flights. The parent platforms were also rather successful. The Tupolev Tu-95 remains in service with Russia to this day. The American B-36 had a shorter run and was replaced by the iconic B-52, also still in service.

Jet engines are part of what did in the nuclear-powered bombers. Early but mature jet fighter designs left drawing boards and entered serial production at roughly the same time as the bomber prototypes. They were much faster than turboprop bombers, and if they crashed or were shot down, there would be no risk of nuclear contamination.

Intercontinental ballistic missiles were also played an outsized role. Why build and maintain a massive aircraft, train pilots, and then risk both to deliver payload when a missile would do the same job faster with no risk to life?

Nuclear-powered submarines that could carry ICBMs also doomed the continued development of nuclear-powered aircraft. They were thought to be safer too, although there have been notable accidents.

Still, the test programs were not totally unproductive. Some of the nuclear data that the B-36 program gathered was used in developing the reactors that power NASA’s deep-space satellites.

In April, an accident in Russia’s Arkhangelsk region released a detectable level of airborne nuclear material.

Is nuclear propulsion making a comeback? Hopefully not.