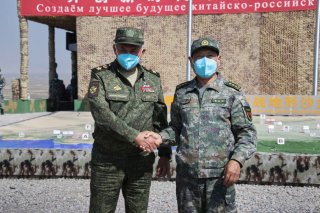 Reaping the windfall of their ongoing cooperation in Afghanistan, Russia, and China seek to further deepen their military ties.

The drills involve as many as 13,000 troops and 400 pieces of military hardware, including 200 pieces of armor, 90 artillery units, and 100 aircraft. The exercises notably featured China’s fifth-generation J-20 stealth fighter jet, marking the first time that the fighter participated in joint exercises. The Russian side was represented by forces from the country’s Eastern Military District, bringing air defense systems, motorized divisions, and Su-30SM fighter jets.

The course of the drills remains largely unclear, with previous statements from Russian and Chinese officials suggesting that the exercises encompassed joint reconnaissance, early warning, and electronic warfare tasks, as well as combined arms strike operations against notional terrorist outposts. Experts say ZAPAD/INTERACTION-2021 is the first China-hosted Russian-Chinese drill hosted on Chinese soil; it is also the first joint drill held in China since the start of the COVID-19 pandemic.

Russian Defense Minister Sergey Shoigu, who attended a portion of the drills, reportedly commended the joint forces’ “coherent operations” and their “high professionalism.” Chinese Defense Minister Wei Fenghe echoed Shoigu’s sentiments about the high level of Russian-Chinese military interoperability while offering even stronger praise. "Amid sweeping changes and the pandemic, the drills reflect the invariable support between China and Russia and show the high level of inter-army ties,” Fenghe said. "This fully testifies to close relations between China and Russia, the indestructible ties between the Chinese and Russian servicemen and the strong and durable friendship between us personally.”

Fenghe averred that the "these drills are yielding obvious results as real warfare can be simulated at a very high level,” but some military experts have cast doubt on that assessment. Peter Layton, a fellow at the Griffith Asia Institute in Australia, told CNN that the drills were too choreographed to yield concrete military results; that they lacked the crucial component of commanders making unscripted decisions with an impact on the course and outcome of a battlefield engagement. "Free play is what hones military skills, not highly choreographed airshow-like events," Layton added.

Chinese state news outlet the Global Times shot back at the CNN report in a heated rebuttal piece, insisting that the drills demonstrated the ability of Russian and Chinese troops to jointly fight “the forces of terrorism, extremism and separatism.” The Global Times article added that “CNN's badmouthing of China-Russia military strategic cooperation will be of no use, nor will it succeed in trying to drive a wedge between the two countries.”

With key operational details from ZAPAD/INTERACTION-2021 still mired in mystery, it is difficult to fully evaluate the drills’ instructional value. But whatever their technical benefits, the exercises augur a new wave of Russian-Chinese cooperation that was recently illustrated in Afghanistan, where the two sides reached a consensus around backing the Taliban’s legitimacy in the weeks following the withdrawal of U.S. forces from the country.

A sizable PLA contingent is expected to make an appearance during the 2021 edition of the International Army Games, a Russian-hosted annual military sports event.