Russia and China Want to Kill U.S. Stealth Fighters in a War 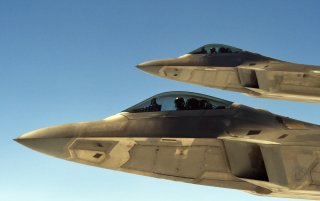 The U.S. Air Force is making a massive and greatly accelerated push to stay in front of newer and emerging detection threats being posed by Russian and Chinese air defenses, systems increasingly reported to be capable of detecting stealth aircraft to some degree. This may or may not be accurate to a measurable degree, yet it is often claimed by Russian media reports and even U.S. weapons developers who recognize that upgrades and adaptations are needed to address new threat equations.

Speaking to the threats posed by advanced air defenses, an Air Force four-star told The National Interest years ago that “stealth is one arrow in the quiver” of variables needed to defeat enemy air defenses, meaning that things like sensor detection, speed, long-range weapons and “networking” are also essential ingredients to destroying enemy surface to air missiles. At the same time, stealth by itself is not only fast evolving with the likely addition of new heat-signature reducing technologies, radar-absorbent materials, and newer external configurations, it is still tough to actually succeed in the actual “engagement” or destruction of a stealth aircraft.

This phenomenon is clearly articulated in an interesting study from The Mitchell Institute of Aerospace years ago called “Survivability in the Digital Age: The Imperative for Stealth.”

The essay points out several technical and tactical reasons why, basically, stealth is here to stay. Part of this rests upon the technological reality that, while it may be conceivable that surveillance radar detects that something is “there,” that detection falls well short of being able to generate the kind of narrow, precision radar signals needed to follow rapid flight trajectory and “hit” a stealth aircraft.  Retired Lt. Gen. David Deptula, Dean of The Mitchell Institute, told the National Interest in a previous discussion that an entirely different set of targeting technologies are needed to actually destroy a stealth aircraft, compared to the kinds of lower-frequency surveillance radar increasingly able to discover that some kind of aircraft might be operating in the sky above them.  Also, this circumstance is part of why massive amounts of speed itself is considered fundamental to stealth, possibly providing the inspiration for why the F-22 is so fast. The faster and more maneuverable an aircraft is, the harder it is to track and destroy. The vectoring, thrust, and supercruise speed of an F-22 is, therefore, an attribute considered fundamental to its radar eluding properties.

By virtue of having vertical structures such as protruding fins and tails potentially more vulnerable to generating some kind of radar return signal, a point explained in The Mitchell Study, F-22s and F-35s may be less stealthy than the purely horizontal configuration of a B-2 and B-21. This explains two things; first, the reason why stealthier bombers are intended to elude both surveillance and targeting radar such that an enemy “does not even know it is there.” Second, it may be why an F-35 and F-22 are engineered with advanced speeds and dogfighting vulnerability, meaning if enemy SAMS are able to sense that something is in the sky, they may be likely to send up a fighter jet to engage and attack in the air as opposed to firing a ground defense missile less likely to achieve a hit or kill. This is why 5th Gen stealth fighters will still need to retain an air-to-air combat dogfighting capability.

All of this is part of why the Air Force is making such fast progress with a 6th Gen aircraft, as it may be even stealthier than 5th Gen. Certainly it explains why massive speeds are being sought after for the 6th Gen fighter, a platform which Air Force Pacific Commander Gen. Kenneth Wilsbach described it as potentially being in the “urgent operational need” category.

“I am advocating for NGAD, and the weapons that go with NGAD are also important so we can stay relevant as our adversaries continue to advance,” Wilsbach told reporters at the 2021 Air Force Association.