Russia and China's Missiles Are Become a Bigger Threat. Here's How to Improve U.S. Missile Defenses 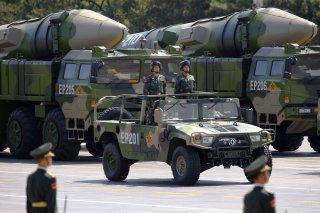 Defense planners are contemplating what better missile defense systems need to be built over the near term to complement our longer-term space-based sensors and hypersonic capabilities now being developed. This issue was first raised in a little covered February Senate hearing and has just been amplified by Northcom’s commander General Terrence O’Shaughnessy in a May 4, 2020 interview and discussion hosted by the Mitchell Institute.

At issue is whether the United States develop upgrades to our current limited national missile defense system, including advanced interceptors at our two current BMD bases, and do so in the interim before the United States acquires at the end of the decade both space-based sensors, an advanced missile interceptor, and hypersonic offense and defense capable systems. This “gap” was identified by both the Chairman and Ranking member of the Senate Armed Services Committee in the February hearing referenced above as one of the key unmet U.S. military requirements.

It is widely assumed the forty-four interceptors’ now deployed in Alaska and California are designed exclusively to defend against what are termed rogue state threats. These threats are limited to North Korea today and perhaps Iran in the future. The missile threats are also considered relatively limited in number and sophistication and primarily consist of a small number of long-range ICBMs deployed on the territory of the DPRK and potentially the Islamic Republic of Iran.

It is often assumed that because a missile is launched from a fixed site that the United States will know the identity of the state—a return address—responsible for such an attack. And it is further assumed the United S would promptly retaliate, and thus normal deterrence would work, making U.S. missile defenses superfluous.

Not only is such an assumption incorrect; it is also naive. The past twenty years of having to combat terrorism has shown us how such attacks are camouflaged to hide the nation’s origin. This includes state sponsors of terror such as the DPRK, Pakistan, Syria, Venezuela, and Iran. As well as their affiliated terror organizations such as the Houthis in Yemen, Hezbollah in Syria and Lebanon, Al Qaeda and the Taliban in Pakistan/Afghanistan, and Hamas in the Gaza Strip. And even when we determine the state origin of such attacks, going to war is both costly and often inconclusive—Afghanistan and Iraq are examples.

Not only could a missile attack be surreptitious, but other missile threats from peer and near-peer competitors must be better understood. For example, it has been widely assumed that the United States should not build missile defenses designed to blunt any missile attacks from China or Russia.

Thus, most commentary asserts any U.S. deployment of conus-based missile defenses should not go forward to deal with possible Chinese or Russian missiles. The idea is such defenses would be undermining strategic stability and the Chinese and Russian capability to respond to a United States attack.

This is reasonable insofar as it goes.

But it misses the adoption of a new strategy by Russia of escalating or threatening to escalate a crisis to the nuclear level to get the United States to stand down or surrender. The Vice Chairman of the Joint Chiefs of staff, General John Hyten, explains this Russian strategy as an “escalate to win” doctrine.

Here the Russians have adopted the threatened but limited use of nuclear-armed ballistic missiles as a credible means to defeat America’s superior conventional military capability and thus prevent the United States from coming to the defense of its allies and friends whether in NATO or in Asia. In short, would the United States risk all-out retaliation and nuclear Armageddon in response to a very limited Russian strike. If we stood down, Russia could attack American allies with impunity, leading to the break-up of NATO or U.S. alliances in Asia or the Middle East.

Given Conus-based missile defenses are not sufficiently sized to defend against a thousand Russian warheads or multiple hundreds of Chinese warheads, the default position of American civilian and military planners has been to avoid deploying any missile defenses at all aimed at defeating Russian or Chinese missile threats. Leaving America 100 percent vulnerable was the long-standing default position of U.S. strategy under the appropriately named but incredible strategy of “mutual assured destruction.”

But what if for example the coercive Russian and Chinese missile threats are limited to two dozens of such missiles. Then American and allied missile defenses become much more practical to where we have an excellent chance of intercepting and destroying most of the enemy missiles. Significantly blunting a limited Chinese or Russian missile threat, while not any guarantee of 100% success, could be sufficient to enhance deterrence and better prevent Chinese or Russian aggression in the first place.

Our current GBI system in Alaska has most recently successfully intercepted six of the past seven missiles in realistic tests, giving a heightened deterrent effect to our missile defenses. This is markedly different from the oft-heard criticism that our missile defense systems in Alaska and California are a technology that when tested has largely failed (Total tests are ten successes in eighteen attempts over the past near two decades).

As for regional threats, the United States is augmenting our missile defenses elsewhere. In Romania we are using a Navy Aegis cruiser- based system but placing it on land coupled with advanced radars to protect the Black Sea area from Russia and Iranian missile threats.

My idea is to deploy by 2025, a near-term improved next generation of ballistic missile interceptors in Alaska and California to better deal with rogue state and major state adversaries. This would precede the longer-term planned development of both space-based sensors and advanced interceptors designed to defeat emerging hypersonic capable missile threats.

However, to do this will require some artful balancing. As Northcom Commander Gen. Terrence O’Shaughnessy explains, our nation needs to see missile threats coming at us and only space-based sensors can track maneuverable and fast hypersonic capable missiles. And while we are building these capabilities, defense dollars for missile defense might not be sufficient to do everything we might wish to do. But the threats we face are real and growing and are not hypothetical.

And there is considerable understanding in Congress of exactly this problem. When General O’Shaughnessy testified February 13 before the U.S. Senate Armed Services Committee, both Chairman James Inhofe and ranking member Jack Reed, explicitly brought up the gap between the missile defenses we have today and the planned advanced interceptors and space-based sensors coming into the force after 2030.

Both Senators supported the need to have awareness of the threat environment—described by General O’Shaughnessy in his Mitchell remarks as “from the sea to space.” But both Senators also cited the need for more interceptors.

General O’Shaughnessy concurred in his May 4 remarks, declaring we indeed needed more and cheaper interceptors. General O’Shaughnessy particularly noted directed energy as hopefully having the capability to fire at a high rate, have a deep magazine, and deal with multiple threats.

However, the promise of directed energy while emerging is again not going to fill the gap that Inhofe and Reed identified. And it is not only the continental United States that needs such better missile defenses, but our combat commanders in Asia, Europe, and the Middle East. So, this is an important military requirement.

What is one solution?

The current Ground Based Interceptor (GBI) system in Alaska and California could be upgraded in the interim to better deal with growing and serious missile threats. General O’Shaughnessy echoed this view explaining at the SASC hearing “we cannot wait ten years to get the next generation interceptor fielded.”

One could also be more ambitious and retrofit the current forty-four interceptors to upgrade the entire system, and better deal with more advanced threats that will certainly emerge from rogue states as well as from Russia and potentially China.

This would then deliver to General O’Shaughnessy his requirement that even with new sensors we could then in the interim “augment additional missile defense capability…in Alaska.”

Peter Huessy is president and CEO of GeoStrategic Analysis, a national security firm he founded in 1981.