Russia and Israel Have Both Unveiled Deadly Urban Warfare Semi-Tanks 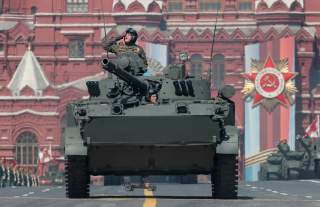 Key point: Urban warfare requires the infantry-carrying capacity of a personnel carrier with the firepower and protection of a tank. So Russia and Israel figured why not combine those two vehicles?

Israel's Namer isn't exactly a tank: it's a 66 ton armored personnel carrier derived from the chassis of the Merkava IV tank, but minus the turret. It can carry a crew of three plus nine infantrymen, and carry them under tank-like protection instead of the weaker armor of most troop carriers. But armed with only a couple of machine guns, it lacked firepower.

Now Israel is testing beefed-up weaponry on the Namer. The upgrade is a 30-millimeter cannon in an unmanned turret. Thus the upgraded vehicle will have the armor protection of a tank, but the firepower of an infantry fighting vehicle more like the Bradley, BMP or Puma.

Why the extra firepower? The same reason that Russia is testing T-72 tanks converted into Terminator 2 support vehicles armed with cannon and anti-tank missiles. Chastened by losing numerous armored vehicles in urban combat during the early conflict in Chechnya, Russia wants a tank-like vehicle that can support and protect regular tanks in city streets. For its part, facing combat in the alleys of Gaza and the villages of southern Lebanon, Israel wants a troop carrier with sufficient armor and armament to survive a street fight.

“An APC equipped with a turret and cannon gives it an advantage during urban warfare,” said Brig.-Gen. Baruch Matzliach, head of the Tank Program Administration, according to the Jerusalem Post. “The shortened cannon makes it more maneuverable, and [gives it] the ability to provide firepower to infantry soldiers. It also lets infantry soldiers be more independent on the battlefield, with less dependence on other units to provide firepower.”

Like the Merkava, the Namer is protected by the Trophy active defense system to stop anti-tank rockets. However, the weapons and protection won't compromise the vehicle's troop-carrying mission. “The turret is unmanned and does not penetrate the combat cell so that the ability to carry soldiers is not harmed,” Matzliach said. “Its operation is expected to be simple and will be performed by the APC's crew. The turret will also incorporate an active defense system and additional systems that will greatly contribute to its capabilities.”

In addition, Israel is also adding a turret to beef up the firepower of the Eitan—Israel's equivalent of the U.S. Stryker. “The Eitan will also come equipped with an FN MAG [machine gun], .50 caliber heavy machine gun, a 30mm cannon with a range of 2,500 meters and a missile launcher that can be operated without crew members leaving the vehicle and exposing themselves to the enemy,” the Jerusalem Post said. Though lacking the thick armor of the Namer, the wheeled troop carrier will have the Trophy active protection system against anti-tank rockets.

At 66 tons, a Namer weighs twice as much as a Bradley and triple the weight of a BMP-3. Yet the IDF clearly feels that there is a role for what is essentially a cross between a tank and an armored personnel carrier.