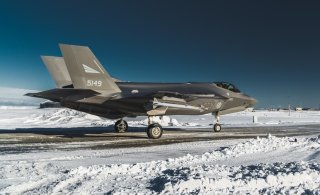 The U.S. Air Force now operates as many as fifty-four operational F-35A fifth-generation fighter jets at Eielson Air Force Base, Alaska, increasing the service’s attack range and firepower across the Northern Hemisphere.

F-35 stealth fighters stationed in Alaska can reach anywhere in the Northern Hemisphere in one sortie, meaning it places critically strategic areas in the Arctic within the mission envelope available to the group of fifth-generation aircraft.

Given the F-35’s advanced networking capabilities, larger numbers of the jets operating in tandem introduces tactical possibilities that were previously not possible. For instance, while it was engineered to conduct surveillance and launch attacks at effective standoff ranges and dispersed formations, the F-35 is also built with a common Multi-Function Datalink (MADL) network. MADL quickly and efficiently connects F-35s to one another, enabling rapid transmission of intelligence information, surveillance data, or targeting detail between formations or squadrons of the jet.

Placing large numbers of operational F-35s in Alaska also brings additional strategic benefits given the ongoing competition with Russia for influence and presence in the Arctic. Alaska is only 55 miles away from Russia’s coast, placing eastern parts of Russia within easy striking range for formations of F-35s should that be necessary.

The operational benefits of placing two squadrons of F-35s in Alaska is strengthened by previous Air Force efforts to test the jet in extreme cold weather conditions at Eglin Air Force Base, FL. In a special climatic chamber at Eglin as far back as 2015, the F-35 was exposed to temperatures as low as 40-degrees below zero and subjected to ice, snow, wind, and harsh Arctic conditions.

"I was there for negative 15 degree Fahrenheit testing. It is really, really cold. It was kind of a surreal experience. When I walked into the cockpit, the plane had been sitting in negative 20 degrees for more than 24 hours. We would dress in arctic gear as we went out to the aircraft to start the evolution," F-35 pilot Tony “Brick” Wilson told The National Interest during the tests in 2015. "The testing begins by ensuring that the entire place is either hot soaked or cold soaked."

The tests were just one part of a six-month assessment of the F-35's ability to perform in wind, solar radiation, fog, humidity, rain, ice build-up, vortex icing and snow, officials said. It included flying the aircraft in extreme temperatures ranging from 120 degrees Fahrenheit to minus 40 degrees Fahrenheit.