Is Russia Building Its Very Own Javelin Tank-Killer Missile? 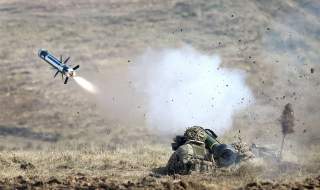 Earlier this year defence-blog.com reported on a new man-portable anti-tank guided missile (ATGM) reported to be in development by the Russian military complex. These reports compared the upcoming system to the American Javelin system, due to the rocket being fire-and-forget.

But knowing Russian doctrine, is a Javelin style system the best fit? Could the Russians be developing a simpler system instead?

Spirin lists a variety of aspects that future ATGMs are expected to improve: armor penetration, resistance to jamming. But critically, it lists “обеспечение поражения целей в слабо защищенные проекции,” or roughly “destruction of the target by hitting weak zones” as a key aspect of the ATGM.

This is in marked contrast to earlier Russian ATGMs which largely used larger warheads or more warheads to defeat armor. This could be in response to the increasing strength of composite armor packages on NATO tanks such as the latest M1A2C Abrams, which render their armor hard to defeat with simply larger warheads.

Some Russian gun-launched ATGMs had limited top-attack capability by boosting their flight path as they approached their target. This was probably because the penetrative power of these was limited by the diameter of the gun barrel.

The new missile is also innovative in that it’s meant to be fire-and-forget. Earlier Russian and Soviet missiles are almost always semi-automatic command-line of sight (SACLOS), with the system requiring the gunner to keep a reticle on a target vehicle until impact. Recently this has been improved into automatic command-line of sight (ACLOS) systems via upgrades to the launchers, but these systems don’t allow for a vehicle or soldier to withdraw immediately after launching.

Given the fire-and-forget and top-attack aspects of the new Russian missile it seems likely that the Russian system will be a close copy of the Javelin.

Later details in the report suggest otherwise. Emphasis is placed on launching the missile from “unprepared premises” (малоразмерных неподготовленных помещений) and its utilization for fighting in urban areas.

While the Javelin is nominally a man portable system, it is rather bulky and hard to get into action rapidly. Its command-launch unit thermal sight requires a cool down time of 2.5-3.5 minutes for it to be able to fire shots, though the day sight can be used to lock onto targets faster.

Due to the parameters in which it is expected to be utilized, the new Russian ATGM is more likely to resemble the Israeli Spike-SR or Enforcer MBDA shoulder fired weapons, both single-shot tubes without a separate seeker. These launchers are fast to get into action (thirty seconds cooldown for the Spike), and Russian combat doctrine has tended to favor single-shot launchers widely issued to troops for operations in urban terrain.

Regardless, a fire-and-forget top-attack ATGM would pose a potent threat to NATO tanks. It’s unsure whether the Trophy system being experimentally fitted to Abrams would be able to counter a top-attack ATGM, as the missile’s approach could come in from above the detection zone of the Trophy’s radar.