Russia Is Building Their Own AR-15. Is It Any Good? 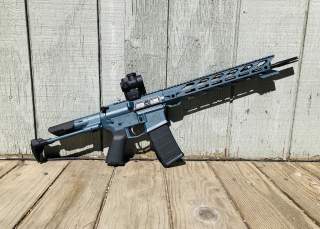 Key point: This is a smart move on Russia's part for various reasons. However, questions remain. Here are a few answers we hope can shed some light on this new weapon/

A Russian arms maker has developed a Russian-ized version of America’s AR-15 rifle.

Promtekhnologiya LLC, which produces ORSIS-brand rifles and carbines, has redid the AR-15 (known as the M16 in the U.S. military) with a heaver 7.62-mm round used by Russian weapons such as the AK-47 rifle and RPK machine gun.

“The analogue of the American AR-15 rifle was tested in the ‘Russian’ caliber of 7.62x39 mm,” according to the TASS news agency. “The bullet of a cartridge is twice as heavy as the bullet of an American automatic rifle cartridge 5.56 and, therefore, has great energy at all distances of practical shooting.”

“Weight parameters and recoil parameters have not increased compared to the smaller caliber,” the company added.

Promtekhnologiya claims test results have been promising. At the moment, the total shot during the tests for the resource exceeded 17,000 shots,” the company said. “At the same time, the accuracy and accuracy indicators remained within the declared norm of 1.5-2 MOA [angular minute] with target ammunition at a distance of 300 meters. The rifle also passed climatic tests.”

Promtekhnologiya has also developed an automatic-fire version for military use. The company suggests that the Russian rifle is actually superior to the American version in some respects. “The company emphasized that the rifles in the new caliber are produced at facilities in Moscow and are equipped with high-precision ORSIS barrels of their own production. ORSIS barrels significantly increase the accuracy and resource of the product compared to the original American-made rifle.”

This isn’t Promtekhnologiya’s first foray with the AR-15. In September, the company began mass production of the ORSIS-AR15J rifle, an AR-15 in 5.56x45 mm caliber.

There are American companies already produce the AR-15 in a 7.62 x39 version. Not surprisingly, opinions are split as to which nation make the better AR-15. “No doubt Peoples Collective Steel Stamping and Tractor Factory No. 261 has quality control in place, but it in no way matches that of a modern American injection molding plant,” quipped one American writer in 2014.

Ironically, Russia has complained about the U.S. military’s copying of Russian weapons. In 2018, U.S. Special Operations Command launched a search for manufacturers who could produce copies of Russian machine guns such as the PKM and NSV models. The idea is that many groups that America supports around the world, such as the in the Middle East, use Russian-made weapons. So instead of scrounging around the arms market looking for new weapons, why not have American manufacturers produce them in the United States?

In truth, there are guns have become weapons of the world. The most famous is the AK-47, which has been copied by China, numerous other nations, and many a gunsmith in a Middle Eastern bazaar. Kalashnikov itself has a U.S.-based operation – Kalashnikov USA -- that allows Americans to buy AK-47s made in America.

It turned out to be a clever business move. In 2014, the U.S. imposed sanctions on Russia for its annexation of Crimea from Ukraine, which led to the U.S. and the European Union banning weapons transactions with several Russian defense companies. But having a U.S.-based manufacturing company, that’s independent of the former mother company back in Russia, enables AK-47s to be sold in America.

Michael Peck is a contributing writer for the National Interest. He can be found on Twitter and Facebook. This piece was first featured in 2019 and is being republished due to reader's interest.