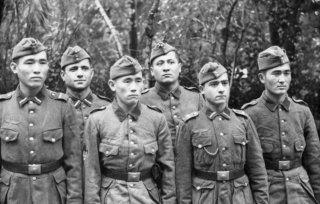 As the nations of Central Asia celebrate three decades of independence from the now defunct-Soviet Union, the region’s relations with the Russian Federation are generally cordial, though not without occasional tensions. While Central Asian states generally cooperate with Russia in areas such as defense, trade, and other common foreign policy interests, the legacy of Soviet propaganda has left deep scars, which bleed into everyday life today.

The legacy of Soviet-era propaganda about countless Central Asian individuals, often based on lies and exaggerations, has had a lasting negative effect on how the inhabitants of Kazakhstan, Kyrgyzstan, Tajikistan, Turkmenistan, and Uzbekistan remember their relatives, ancestors, and compatriots who lived during the Soviet era. There are two cases in particular that demonstrate how Central Asian individuals were unfairly vilified by the Soviet propaganda machine at the time, though new research and government actions have cleared their names. Whether a revision of history impacts Russia-Central Asia relations in the near and long term remains to be seen.

Mustafa Shokay and the Turkestan Legion

The Kazakhstani Mustafa Shokay was a journalist, scholar, activist, and, for a brief time, a key leader in the movement towards an independent Turkestan. As the Russian civil war commenced and Bolshevik control spread to Central Asia, Shokay migrated to Western Europe, but his goal of creating a united and autonomous Turkestan for Turkic people never subsided. Eventually, Shokay arrived in France. When the German army entered Paris in 1940, he was arrested and remained in German custody until his death in December 1941. There is a dispute over whether he was murdered, or died from an illness contracted in a concentration camp.

This is where the situation gets blurry. We know that Shokay was a prisoner. However, he attracted the interest of Nazi leaders who wanted to create a Turkestan Legion to fight alongside the Wehrmacht. In 1941 the Turkestan Legion, a set of military units made up primarily of Red Army prisoners of war (POWs) from Central Asia became operational in fighting against the Soviet Union. After the war, Soviet propaganda machine demonized Shokay’s name, labeling him a fascist conspirator. While he did offer to help train Turkic soldiers to fight the Red Army, it is doubtful that Shokay was an active collaborator. His letters highlight that he was skeptical of the Germans, particularly after visiting Nazi POW camps. Rather, it seems did the minimum necessary to stay alive. In any case, Soviet-era statements and propaganda about Shokay effectively silenced and erased the positive actions he carried out for a free Central Asia prior to his capture.

Ibragim Bek and the Basmachi Raiders

In October 2020, a governmental working group was created in Uzbekistan to research and learn about the persecution and fate of Uzbeks during the waves of Soviet repressions. According to a mid-September article by the news agency Newizv.ru, Uzbek president Shavkat Mirziyoyev has recognized the Basmachis as “fighters for national independence.” The announcement was made on August 31, the national day of remembrance for the victims of political repression.

The Basmachis were a group of people that fought against growing Soviet control and repression during the 1920s until around 1931. When the October 1917 Revolution broke out, many Central Asians saw this as an opportunity to become independent from Moscow, though the revolt ultimately failed. A total of 115 Basmachis executed by Soviet authorities have had their names rehabilitated per an August 25 resolution by the Supreme Court of Uzbekistan. One of them was Ibragim Bek, better known as the Kurbashi (or commander) of the Basmach movement in Central Asia.

Prior to this landmark decision, the name of the leader of the Basmachi was synonymous with the word “enemy” throughout Central Asian states, thanks to Soviet propaganda. In countries like Afghanistan, Tajikistan, and Uzbekistan, Ibrahim Bek still is regarded as a bandit or an illiterate savage. However as new information emerges and the government takes a more friendly attitude towards his legacy, Ibragim Bek may eventually be elevated to the status a national hero.

A 2015 essay in the Journal of Eurasian Studies about the Russian/Soviet legacy in Central Asia with a focus on Tajikistan addressed the issue of historical revisionism in the post-Soviet world. “Russian and Soviet authors generally claimed that the colonial conquest of Central Asia by the Tsarist and Soviet Russia was the free choice of Central Asian nations whose wish was to be united with the great Russia,” the author explains. Shokay and Ibragim Bek clearly demonstrate that this was not the case. But some Russians have pushed back against the efforts to rehabilitate these figures. A critical article published in Russian newspaper Vzglad argues that “the decision to rehabilitate more than a hundred [Basmachis by the Uzbek government] was made in this way, not on legal grounds, but rather emotionally. As a result, among the rehabilitated were simply bandits (even if they are legendary, like Ibrahim-bek).”

How does history affect the present?

Both Kazakhstan and Uzbekistan are carrying out historical research and analysis to rehabilitate and vindicate the names of the many victims of Soviet repression. Future Central Asian history textbooks will likely feature individuals like Mustafa Shokay and Ibragim Bek. Already Shokay’s name is well-respected in Kazakhstan and he is referred to by many scholars as the first Central Asian political migrant.

Interestingly, revising and correcting history has not, so far, had a negative effect on Russia-Central Asia relations. Ambassadors have not been recalled over Tashkent’s new attitude towards the  Basmachis, nor has Kazakhstan been expelled from the Eurasian Economic Union for regarding Shokay as a hero.  Eventually, a Russian policymaker may protest what Central Asian governments and society are doing. It is highly unlikely that Moscow’s close relations with Nur-Sultan or Tashkent will be affected in the immediate future. This stands in contrast to how historical revisionism is affecting relations between Russia with the Baltic states and Ukraine.

Nowadays, the Central Asian governments generally have cordial or close relations with the Russian Federation, as their priorities are to maintain regional stability, attract investment, and, in some cases, secure defense alliances. While these objectives are understandable, there is a parallel movement occurring, in which the governments, scholars, and citizens of the five Central Asian states are studying and learning more about what really happened during the almost seven decades of Soviet rule. Revisiting history is a sensitive and often heartbreaking process as it has a deep effect on a person’s identity, including national identity, but for Central Asia’s relations with Russia to truly move forward, the past must be properly understood.