Russia, China and More: How America Can Address Its Biggest Coming Threats 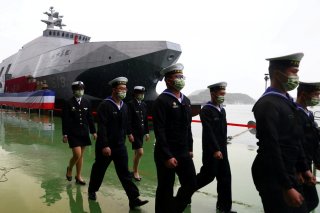 The reaction to Joe Biden’s pick to lead the Defense Department, retired Army Gen. Lloyd Austin, has so far ignored perhaps the most significant security issue of our nation: China. Why? The silence on this is bewildering.

Great-power competition with Russia and China is not new, and was a factor in the Obama-Biden administration in its final year. Today, intensifying pressures are driving competition between the United States, China, and Russia. This contest is about to enter a more dangerous phase, making the need for a strong Navy, increased forward military presence, and pragmatic diplomacy national imperatives.

For China, an aging population, unresolved territorial disputes, and a slowing economy are conspiring to challenge the Chinese Communist Party’s (CCP) legitimacy. This legitimacy has been anchored in the CCP’s delivery of prosperity as measured by increasing gross domestic product (GDP) which has been ebbing as China’s population ages. As this post-Tiananmen promise falters, there will be sharpening nationalist calls to resolve the Taiwan dispute—a scenario that could plausibly draw the United States into war.

Additionally, the CCP’s attempts at enacting an extradition law sparked protests in Hong Kong that continue today. A consequence has been the repudiation of the CCP’s decades-old proposed framework for peaceful resolution of the Chinese civil war known as “One-Country, Two-Systems.”

The absence of a new framework for peacefully resolving the dispute between the CCP and Taiwan, and these economic pressures will come to a head by 2029. This is when China begins an unavoidable population decline and the associated GDP growth rate likely shrinking from today’s 6.9 to 3 percent by 2030. Coincidently, the CCP is urgently seeking to field a fully modern military by 2027—a budget priority in the CCP’s 2021–25 five year plan.

All the while, Russia remains an unremitted strategic agitator seeking to weaken a geopolitical order it views as antithetical to its interests. Since the 2008 Russo-Georgian war, Russia under the leadership of Vladimir Putin has proven adept at leveraging a limited military, economic and diplomatic hand to great effect—notably the annexation of Crimea and interventions in Syria and Libya. As China grows more aggressive in Asia, it potentially distracts the West, opening avenues for Russia to advance its own interests in its periphery at NATO and U.S. expense.

Moreover, both President Xi Jinping and Putin have pushed through legal changes that allow them to effectively serve for life. This marks a break from Russia’s post-Soviet experience, as well as China’s post-Cultural Revolution tradition of avoiding the instabilities of a cult of personality. This likely means the United States will know who it is dealing with in its principal competitors for some time. The downside, given that life-tenure carries historical luggage in both countries, is that Xi and Putin will be compelled to validate their prolonged leadership with delivery of military, economic or diplomatic successes.

Like traditional autocracies, both are externally risk adverse since they must also contend with domestic challenges; CCP spends almost 20 percent more on internal defense as it does for external national defense. Because of this, they attempt to change realities on the ground and at-sea without direct confrontation via so-called hybrid or gray-zone operations. Backed by active influence campaigns, economic largess, and military presence, their theory of victory is to alienate the United States from security allies and partners, elbow out market influence and access, and depict the rules-based order as hypocritical and only serving U.S. interests. Their goal—position themselves to dictate or accomplish via fait accompli their strategic economic, political, and military goals.

To effectively contest Chinese and Russian theories of victory, the Department of Defense and Navy must compete below the threshold of conflict to confound Xi’s and Putin’s strategic calculus. To deny them victories without firing a shot, the Navy will need to build and employ a larger fleet with new competencies to keep Xi and Putin unsure of the correlation of forces, explicitly challenge strategic narratives and influence campaigns, and pre-empt fait-accompli operations through a forward naval presence.

Doing this highlights the need for the United States to adroitly employ Naval Statecraft backed by an appropriately sized, trained, and equipped fleet. To accomplish this, the Navy must field a war-winning fleet while conducting a proactive strategic competition with China and Russia. To shift the Navy into this new paradigm, seven imperatives must be simultaneously addressed:

The United States cannot wish away those who view its prosperity and democratic principles as an impediment to their designs. Reluctantly, the nation has awoken over the last five years to a new era of Great Power Competition, which is about to enter a dangerous new phase. To slacken resolve and vigilance now would make conflict more likely and costly.

Brent D. Sadler is Senior Research Fellow for Naval Warfare and Advanced Technology in the Center for National Defense at The Heritage Foundation.