Russia Claims Its New Nuclear Weapons Are A Response To U.S. Missile Defense 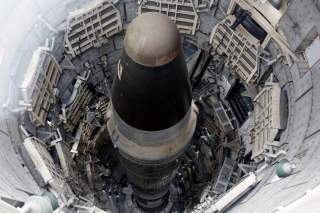 Key point: The United States has long been Russia’s primary nuclear rival and the technical capabilities that Moscow has chosen to spend a great deal of time, money, and effort to develop are laser-focused on defeating missile defense.

In a speech before Russia’s Federal Assembly, Vladimir Putin unveiled several new nuclear-weapons systems. The speech comes less than a month after the release of the Trump administration’s Nuclear Posture Review, which named Russia as a primary strategic competitor of the United States and called for new low-yield nuclear weapons to counteract Russia’s alleged (and highly disputed) “escalate to deescalate” strategy.

The timing of the NPR and Putin’s speech gives the impression that the new Russian capabilities are a reaction to American nuclear policy. Instead, Putin stated that the new nuclear weapons were meant to counter U.S. missile defenses, which have steadily expanded since the George W. Bush administration withdrew the United States from the 1972 Anti-Ballistic Missile (ABM) Treaty in 2002.

The United States has long said that its missile defenses are not meant to undermine Russia’s nuclear deterrent, and the limited size and poor accuracy of current missile-defense systems should reassure Russia. But it is readily apparent that Russia—and China—is not mollified by such assurances.

As policymakers in Washington contemplate further expansion of missile defense to counter the pressing threat posed by North Korea, it is important for them to appreciate that missile-defense policy doesn’t just impact its intended target.

Many of the nuclear capabilities Putin discussed in his Federal Assembly speech feature technical characteristics that help them penetrate or circumvent U.S. missile defense systems.

The unnamed nuclear-powered cruise missile was perhaps the most eye-popping new capability. Putin described it as, “A low-flying low-visibility cruise missile armed with a nuclear warhead and possessing practically unlimited range, unpredictable flight path . . . [that] is invulnerable to all existing and future anti-missile and air defense weapons.” A nuclear propulsion system aids in missile defense penetration by increasing the missile’s range and ability to maneuver. Increased range allows the missile to take flight paths that are not covered by missile defense radar, and maneuverability reduces the likelihood of a successful intercept.

Another new capability that makes use of maneuverability to evade missile defenses is a hypersonic glide vehicle known as the “Avangard.” The Avangard is carried atop a ballistic missile. After the missile reaches outer space the HGV is released and falls back to earth, but not on a ballistic flight path. Instead, it “glides” towards its target and is capable of changing direction in flight, which helps it avoid missile-defense radar coverage and interceptors. China is also developing HGVs to counter U.S. missile defenses deployed in East Asia.

The final nuclear capability of note is the RS-28 “Sarmat” intercontinental ballistic missile. Unlike the nuclear-powered cruise missile and the Avangard, the RS-28 is not a “new” capability; Russia acknowledged the missile’s existence several years ago. However, Putin did provide some details about the Sarmat that highlighted its ability to defeat U.S. missile defenses. He said that the missile has “practically no range restrictions,” and also mentioned Sarmat’s ability to carry multiple warheads and HGVs, stating “Sarmat will be equipped with a broad range of powerful nuclear warheads, including hypersonic, and the most modern means of evading missile defense.”

Practically all of the nuclear weapons systems mentioned in Putin’s speech, old and new, were justified as a response to the steady buildup of U.S. missile defense since it withdrew from the ABM Treaty. He argued, “We create state-of-the-art systems of Russia’s strategic weapons in response to the U.S. unilateral withdrawal from the ABM Treaty.” Putin was especially concerned by the deployment of two Aegis Ashore missile-defense sites in Eastern Europe that the United States argues are necessary to protect NATO allies from Iranian missiles.

It is tempting to view Putin’s vitriol toward U.S. missile defense as little more than propaganda. The size and quality of missile-defense capabilities are too low, and the Russian arsenal far too large to provide a meaningful level of protection against a Russian nuclear attack. Moreover, it would be foolish to expect Russia’s nuclear arsenal to not incorporate new technology over time.

However, the United States has long been Russia’s primary nuclear rival and the technical capabilities that Moscow has chosen to spend a great deal of time, money, and effort to develop are laser-focused on defeating missile defense. Russian perceptions of what missile defense signals about long-term U.S. intentions seem to weigh much more heavily on its nuclear strategy than technical reality. If American policymakers want to avoid a new arms race with the Russians, then it would be wise of them to not dismiss Russian concerns as merely propaganda as they make missile-defense policy.

Eric Gomez is a policy analyst for defense and foreign policy studies at the Cato Institute. This article first appeared two years ago.