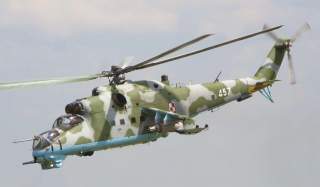 Russia is developing a successor to the famous Mi-24 assault helicopter, also known as the "flying tank."

"This will accommodate eight troops, becoming virtually an airborne combat vehicle with its takeoff and landing capabilities, including in mountainous terrain," Romanenko said, according to Izvestia.

This sounds very much like a 21st Century version of the Mi-24 (NATO code name Hind), the ubiquitous Cold War helicopter that first flew in the 1970s for the Soviet Union, and has been a staple of numerous conflicts across the Middle East and Africa. The U.S. Marine Corps wants some to practice fighting against helicopters.  The Hind has even been featured in movies, such as 1984's "Red Dawn," as the generic -- and usually villainous -- Russian helicopter (see a list of movies and video games here).

The Mi-24 (and its modernized Mi-35 version) is a 9-ton helicopter with a maximum speed of about 200 miles per hour. That makes it a bit heavier and slower than the U.S. AH-64 Apache. The Mi-24 is armed with a staggering amount of firepower: a combination of 12.7-millimeter machine guns, 23-millimeter and 30-millimeter cannon, plus three hardpoints on each of its two stubby wings to mount rocket pods, anti-tank missiles or bombs. In effect, the Hind is a rotary-wing descendant of the Second World War Il-2 Sturmovik ground attack aircraft, dubbed the "flying tank."

As if all that firepower wasn't enough, the Mi-24 carries eight infantrymen. Thus the Hind is an attack helicopter that brings its own infantry support (or a transport helicopter that brings its own fire support). Israel's Merkava tank uses the same approach, with the ability to carry eight infantrymen in a cramped but well-armored compartment in the back of the vehicle.

The squat Mi-24 would never win a helicopter beauty contest, and all that armor and firepower makes it a bit of a clumsy flying machine. Nonetheless, the Hind would have been a potent weapon had the Soviets invaded Western Europe. Had the Soviet Union invaded Western Europe, Hind-equipped air assault regiments would have dropped commandos to seize key points and envelop NATO defenders from the rear, while Soviet armored columns raced to link up with them (just as paratroopers were used in World War II). Instead of having to rely on air support, the isolated airmobile troops would bring their own.

The Mi-24 symbolizes how differently America and Russia view helicopter warfare.  Though both are technically attack helicopters, comparing a Hind to an Apache is a mistake (the Mi-28 "Havoc" is actually Russia's equivalent of the Apache). Russia considers the Hind an "assault helicopter": a flying armored vehicle, or more specifically, a flying infantry fighting vehicle. If the U.S. M-2 Bradley troop carrier could fly, it would be America's Hind.

Significantly, the Izvestia article mentions that as far back as the 1980s, the Russian military had contemplated a new assault helicopter -- but based on the Mi-28 rather than the Mi-24. "The idea of the helicopter-carried IFV [infantry fighting vehicle] on the Mi-28 platform had not died in those years, regularly emerging in publications on advanced airborne assault forces," according to Izvestia. "Vladimir Shamanov, Airborne Force Commander during 2009-2016, reverted time and again to this issue. So, in 2013 he declared that work was underway on the concept of a new airborne assault vehicle. In his words, it had to be 'a helicopter with powerful armament capable of making combat insertions out to 10 to 70 kilometers which dramatically enhance the troop’s maneuverability.' Also, the vehicle was supposed to have folding rotor blades and, according to technical specifications, be low-priced and simple to operate."

This suggests that a 21st Century Russian assault helicopter is coming -- but it won't resemble the legendary Mi-24 Hind.