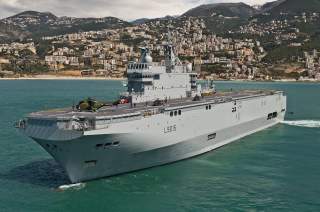 For the first time since the 1990s, Russia’s helicopter carriers are coming back.

Russia will begin building two helicopters carriers as of May 2020, according to Russian news agency TASS, citing unnamed sources. And in a slap at the West, the ships will be built in a shipyard in the  Crimea, forcibly annexed from Ukraine in 2014, which led to Western sanctions against Russia.

"Two amphibious assault ships, with water displacement of up to 15,000 tons, will for the first time in Russian history be laid down at the Zaliv shipyard in Kerch in 2020," one source said. The first vessel is slated to be delivered before Russia’s current 10-year arms procurement plan ends at the end of 2027.

“The ships will be able to carry over 10 helicopters of various types and will be equipped with a dock-type chamber for landing craft utilities (LTU),” TASS said. How many troops will be carried wasn’t specified, though TASS noted that such ships carry from a few hundred to more than a thousand soldiers.

The Wasps give the United States the capability to land a Marine Expeditionary Unit (essentially a reinforced infantry battalion) by sea or air, backed by armor and air support. Deployed around the world as the centerpiece of Amphibious Ready Groups complete with escort warships, such groups have allowed America to land troops at global hotspots at short notice.

And therein lies the irony. Russia was supposed to buy two Mistrals: after the Crimean annexation and Western sanctions, the two ships were sold to Egypt to Russia’s intense fury.

There may very well be an element of national pride (and giving the West the middle finger) in building its own helicopter carriers. But it also points to a more muscular Russian foreign policy.

In the 1960s, the Soviet Union built two helicopter carriers: the Moskva and Leningrad. These were fleet warships, intended for anti-submarine warfare and equipped with 18 sub-hunting helicopters. These were the closest things that the Soviets had for aircraft carriers until the Kiev-class vessels of the 1970s and 1980s.

The new Russian amphibious assault ships suggest a more American-style doctrine of amphibious expeditionary forces that Moscow can maintain off hotspots such as Syria. If so, “send in the Marines” may become as much a Russian phrase as American.