Russia Has “Tiger” Armored Cars, But How Good are They? 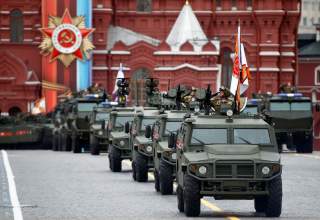 The 4x4 car is one of the most common vehicles in a military's arsenal. From moving troops to mounting crew-served weapons, the capabilities of these light vehicles can often determine whether soldiers live or die on the battlefield. Russia's modern 4x4 is the GAZ Tigr-M. But how good is it? How does it compare to foreign vehicles and its predecessors?

The Tigr’s story begins in the late 1990s. The UAE wanted a vehicle similar to the American Humvee, but with more armor. A design team at GAZ produced a prototype, and vehicles were ready for testing in the mid-2000s.

The Tigr was procured in small numbers in the 2000s, mostly for internal use with the MVD (Ministry of the Interior)'s special teams. The Ministry of Defense officially adopted the Tigr in 2007 for the armed forces, but production was not ramped up until the late 2000s and early 2010s.

At the same time, the Russian Army procured Italian Iveco LMTs around 2009, with a significant purchase in 2012. The Tigr and Iveco are largely similar in technical characteristics and probably were considered to be similar in foreign production dependence as the early generation Tigrs were reliant on foreign components (American Cummins engines) for production—it was not an entirely domestic design.

This changed around 2010 when the new domestic engine built in Yaroslavl began being fitted to Tigrs. At the same time, the design evolved into the Tigr-M, which featured new differentials, brakes, a slightly different hull design, and an NBC system. The design may still use foreign components in other areas, but this is uncertain.

Currently, the Tigr is in extensive use throughout the Russian military. It has been seen in Crimea, by OCSE observers in Ukraine, and in Syria in both Russian and Syrian hands. Many CIS nations have also bought the Tigr for their use.

The technical characteristics of the Tigr are typical for a vehicle of its class. It’s resistant to most small arms fire, although any anti-vehicle or HMG fire is liable to pierce its armor. Maximum speed is around 125 km/h, and there is a turret ring with the option to mount a PK or Kord machine gun or AGS-17 automatic grenade launcher on it.

The Tigr has also been used as a base for a wide variety of other purposes. A version with dual Kornet-EM anti-tank launchers that retract into a compartment in the back has been created, as well as command and control variants to replace earlier vehicles in that role which were based on the UAZ and BRDM chasses.

In all accounts, the Tigr has performed satisfactorily in service in Ukraine, Syria, and domestically. However, the design is perhaps inferior to some other Russian 4x4 light armored cars.

Before the Tigr entered service, there was the GAZ Vodnik. The Vodnik was designed as a response to a Soviet requirement to replace the UAZ, BRDM, and LuAZ vehicles.

It was to have a unified powertrain with the BTR-80 and be completely modular. Different front ends, and rear ends could be swapped on the Vodnik chassis to enhance ease of production, and make the creation different variants easier.

The Vodnik was a completed design when the Tigr was first created, with all domestic components. It's unsure why the Tigr was adopted instead of this wholly domestic design which shared more components with existing Russian vehicles. It's possible that the Tigr was cheaper, or that it performed better in trials (possibly due to the reliability of the American engine and transmissions it was produced with).

Another domestic design for a 4x4 light armored car that was adopted before the Tigr is the BPM-97 armored car. Designed for a Border Troops requirement (the Border Troops being a separate department of the Ministry of the Interior and not part of the Ministry of Defense), the BPM-97 is a heavier, but more heavily armored vehicle that is 4x4 and could serve mostly a similar role to the Tigr.

The BPM-97 could also mount a variety of turrets on the rear section, from the BTR-80A’s 2A72 30mm cannon turret to lighter ones. This would provide considerably increased firepower versus the Tigr.

The BPM-97 does weigh over ten tons though, so it may have been considered too heavy to fulfill the role the Tigr fills. The Ministry of Defense has adopted versions of the BPM-97 under the name "Shot," but they are used mainly in non-front line roles.