Russia Has Big Plans to Expand Its Influence in Africa 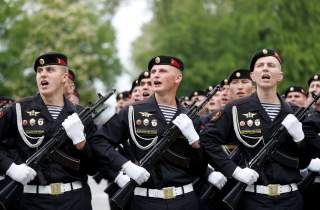 Key point: Moscow wants to grow its trade and military ties to Africa as Beijing does the same.

Editor's Note: Leaders from across Africa have gathered in Sochi, Russia, for the initial Russia-Africa Summit, in which Moscow seeks to expand its security and economic ties with a range of countries on the continent. Russia sees Africa as a key part of its effort to diversify its global diplomatic and security relations as Western pressure, particularly from the United States, grows. Russia has already been able to ink agreements with numerous countries during the summit, including Ethiopia, Egypt and Namibia, covering everything from nuclear technology to military cooperation, adding to the more than 20 deals that Moscow has in Africa. This assessment originally published Sept. 25 takes stock of Russia's attempts to expand its footprint across the continent.

Russia’s strategy to exert influence in Africa has been underway for two years, though it's so far largely consisted of more covert, bilateral activities. But that's slated to change come Oct. 22, when Moscow hosts its first-ever pan-African summit in the city of Sochi. The inaugural meeting will provide a platform for Russia to present a more positive view of its intentions in Africa, where it can act as an enabler in economic and political affairs.

More than 40 African leaders are scheduled so far to attend the two-day event — many of whom hail from countries Russia has never had exceptionally close relationships with. But Moscow's ability to make inroads with these new nations will be limited by its lack of the massive budget that its Eastern and Western rivals have long leveraged to stake their claim on the continent. Thus, Russia's expanded new diplomatic efforts in Africa will likely focus less on offering purely financial support, and more on fostering more pragmatic security and infrastructure partnerships.

What Russia Has to Offer

Moscow has been a notable provider of low cost, low sophistication weapons to Africa for roughly 60 years. Its charm offensive at the upcoming summit — just as it has been in its relations with individual countries — will likely consist of attractive acquisitions in the military domain. Russia has also always been keen on helping African states construct energy installations. And there's a chance Moscow will showcase its existing nuclear power agreements with countries — or sign new ones — during next month's Sochi meeting.

Such military deals or infrastructure developments could also be backed by Russian loans, though the scope would almost certainly be more restrained than those offered by Africa's many other, less cash-strapped suitors. China, for example, has long wooed African leaders with large infrastructure investments. Japan, Europe and the United States, meanwhile, have typically focused on more sustainable investment programs. And in more recent years, money from Qatar and other Gulf states has increasingly made its way into Africa as well. But such a strategy is not viable for Russia, which faces its own budgetary constraints. Moscow will thus likely remain focused on pursuing more profitable opportunities that are less likely to leave it out of pocket.

In doing so, Moscow may find ways to provide services and sell equipment to African states using Russian financing. Russia has many ongoing natural resource extraction projects in Africa, for example, that are mutually profitable for both Russia and its African partners such as Mozambique. Moscow frequently leverages these beneficial resource contracts to provide backing for credit or as a quid pro quo for discounts on extraction services or equipment. Under the right conditions, Russia's expanded strategy could yield similar contracts with more African countries that avoid the risk of not being paid back.

But Russia will lean on more than just pragmatic offerings of military and infrastructure support in its new cross-continent pursuit. One of the primary pillars of Russia’s venture into Africa has been — and will continue to be — leveraging its remaining Soviet legacy. During the Cold War, Russia supported various rebel groups and regimes across Africa in an attempt to compete with Western influence. This strategy also included directly supporting local actors in proxy wars against U.S. and European-supported forces in Angola and Mozambique, in particular.

Today, Russia's direct involvement in Africa is nowhere near where it was during the post-Cold War era. But its political and economic relationships have nonetheless survived thanks, in large part, to the limited overturn of governance in many African countries. The leaders or future leaders that the Soviet Union educated and trained all still hold significant influence in many of these countries. And some, such as Angolan President Joao Lourenco, even remain in powerful positions to this day — offering Russia a foot in the door.

Russia’s charm offensive in Africa will continue to lean heavily on its existing ties with former Soviet allies like Egypt. And indeed, Russian President Vladimir Putin will co-host the Sochi summit with Egyptian President Abdel-Fattah el-Sisi, who also now heads the 55-member African Union. Unlike the Soviet days, however, Moscow can no longer rely on the wave of local Marxism and pan-Africanism that fueled local support behind its Africa policy nearly 40 years ago. In the era of independence wars and postcolonial struggles, these political movements saw partnering with the Soviets as key to freeing their countries from Western colonial oppression. Such outspoken movements have since died out, though that hasn't kept Russia from continuing to peddle the narrative of opposing Western imperialism in its pitches to African countries.

Many African leaders don’t appreciate Western meddling in their affairs, which provides some space for this angle to be successful. But it doesn't account for the growing number of other, non-Western suitors vying for influence in Africa. Thus, at the upcoming summit, Russia will likely also try to warn African leaders of the broader risks of becoming deeply indebted to its other competitors (namely China), while also weaving in messages of Russia’s alleged benevolent mission across the continent. Whether this combination of scare tactics, anti-U.S. rhetoric and pragmatic offerings can successfully distract from Russia's inability to funnel the kind of cash into Africa that so many other countries can remains to be seen.

Russia Expands Its Game Plan in Africa is republished with the permission of Stratfor Worldview, a geopolitical intelligence and advisory firm.