Russia Has Big Plans to Sell Stealth Fighters to India 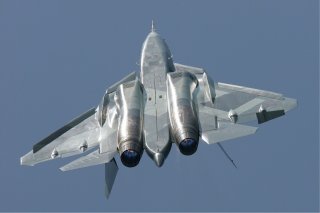 At this year’s Aero India exhibition, Russian defense companies have pulled out all the stops to court their prospective Indian client.

The thirteenth edition of Aero India, a biennial air show and aviation exhibition held in Bengaluru, India, has kicked off today and will run through February 5.

Russia’s Ambassador to India Nikolay Kudashev lauded the event: “[I am] highly appreciate efforts of the Indian organizers to hold in the current conditions the 13th edition of Aero India 2021 - one of the most prominent exhibitions in the world,” also adding that Russia is among the show’s biggest exhibitors.

Russian companies are running over 200 military hardware exhibits at this year’s Aero India event. “We plan to demonstrate Su-57, Su-35 and MiG-35 fighter jets, helicopters Ka-52, Ka-226, Mi-17B-5, Mi-26, S-400 systems, and many others,” noted Kudashev. It was revealed earlier that a model of the Su-57E, the export variant of Russia’s fifth-generation Su-57 fighter, will be displayed at Aero India 2021. Though a potential Su-57 deal remains the big prize for Moscow, Russian arms export officials have not ruled out the possibility of a joint Su-35 production contract with New Delhi. India is likewise seen as a prime import candidate for Russia’s latest attack, reconnaissance, and surveillance helicopters. Russian defense executives are optimistic that these models, including the more recent export variants of the Mi-28 attack helicopter and Mil Mi-17 transport helicopter, will grab India’s attention.

Russian officials have told TASS news that the pandemic has not stymied the pace of military cooperation between Moscow and New Delhi. Ambassador Kudashev listed some of the current bilateral projects between the two countries: “We are successfully moving towards implementation of all priority projects - S-400 systems deliveries, AK-203 Kalashnikovs contract, Ka-226 helicopters supplies and production in India, as well as an advanced cooperation in the areas of combat aviation (including Su-30MKI), main battle tanks (T-90), frigates, submarines and missiles, along with joint production of the unique Brahmos.” Moreover, there are several pending additions to this list. Russian executives say that India’s Defense Ministry has expressed interest in Russia’s new 9K333 Verba man-portable surface-to-air missile system. Further, it was announced on Wednesday that Russian and Indian officials are in talks for a prospective upgrade package to India’s aging fleet of Il-76 multipurpose strategic planes.

Despite the looming threat of retaliatory sanctions from Washington, it appears that India is moving forward with its October 2018 acquisition of Russia’s flagship S-400 missile system. Indian specialists arrived in Russia earlier this month to undergo training on how to operate the parts comprising the S-400 system, with the full delivery of India’s first S-400 regiment scheduled to occur by the end of 2021.