Russia Has An Idea For A New Kind Of Aircraft Carrier, But It's A Real Gamble 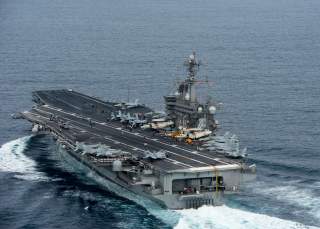 Key point: It could make history.

Russia's light aircraft carrier will feature a semi-catamaran hull, a representative of the Krylov Scientific Center told Russian news agency TASS (see the translation and a model of the design here).

"The project is distinguished by the underwater part of a semi-catamaran form," he said. "Catamaran actually means two hulls united by a platform. It has a wide deck which is important for an aircraft carrier. The design adds flight deck space on which the number of aircraft depends. As a result, a medium-displacement ship can carry a full-fledged air wing."

"The essence of the carrier is below the waterline," he added.

The light carrier will displace about 40,000 to 45,000 tons, according to TASS. That's less than half the displacement of a U.S. Ford-class carrier. It will be about 1,000-feet long, with a maximum speed of 28 knots using gas-turbine propulsion and an at-sea endurance of 60 days.

The vessel will carry an air wing of 24 to 28 Su-33 and MiG-29K), four airborne early warning aircraft and about a dozen Ka-27 helicopters. Again, that's about half the air complement of a U.S. aircraft carrier. The ship will be armed with Pantsir-ME anti-aircraft missiles, as well as anti-submarine weapons and electronic warfare equipment.

But why a catamaran design instead of a conventional flat-top or ski-jump carrier? "Catamarans offer the advantages of reduced drag which permit catamarans to attain speeds not possible with a monohull and/or the option of being equipped with less powerful and therefore less expensive engines," according to GlobalSecurity.org. "Because of their relatively great length in relation to their width, a catamaran is able to travel at high speed and has excellent lateral stability."

But there are disadvantages to a catamaran. "As is well known to those skilled in the marine arts, catamarans suffer from the serious disadvantage that they are considerably less stable in rough seas and from a propensity for submarining their forward hulls into large head seas which can result in the forward end of the hull 'digging in' and the vessel flipping end for end," GlobalSecurity says.