Russia Has Lost One-Third of Its Troops in Ukraine, Britain Says 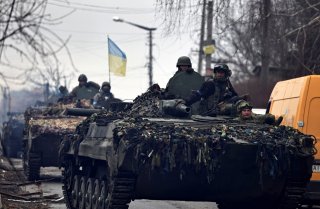 Britain announced on Sunday that it estimates Russian losses in the ongoing war in Ukraine to be roughly one-third of the original invasion force—a loss that has placed its ability to continue the fight in serious jeopardy, according to Reuters.

The British Ministry of Defense said in a statement on Twitter that Russia had “lost momentum and fallen significantly behind schedule” due to the losses.

“Despite small-scale initial advances, Russia has failed to achieve substantial territorial gains over the past month whilst sustaining consistently high levels of attrition,” the statement read, adding that the Kremlin’s forces were unlikely to make further progress within the next thirty days. Russia’s losses in Ukraine are thought to include much of its heavy equipment, as well as elite troops and veterans who cannot be easily replaced in the short run, complicating efforts at a renewed offensive.

When Russia invaded Ukraine on February 24, its army consisted of roughly 200,000 troops—a number estimated to be considerably lower than Ukraine’s regular army, irregular defense forces, and militias. Some Western experts have suggested that Russian leader Vladimir Putin had predicted the Ukrainian government would collapse after the invasion and that it would be welcomed by many native Russian speakers in Ukraine’s east—two predictions that have been discredited throughout the war.

Russia’s initial battle plan involved invasions east from across its border with Ukraine and south from its bases in Russian-allied Belarus. The forces in Belarus, which had aimed to capture Kyiv in the opening days of the conflict, have since been forced to withdraw and have largely been repositioned to ongoing battles in eastern Ukraine. In addition to repelling attackers on Kyiv, Ukraine’s forces have recaptured much of the country’s northeast and have pushed Russian troops away from Kharkiv, the country’s second-largest city.

Ukrainian troops have also made progress toward Izium, a town in eastern Ukraine that has served as a logistics hub for the ongoing invasion. Elsewhere in Ukraine’s eastern Donbas region—which is partially occupied by two pro-Russian separatist movements—Russia is thought to have made progress against Ukrainian defenders. Russia has continued assaults on the city of Mariupol, where the final Ukrainian defenders have fortified the expansive Azovstal steel facility and repelled attempts to remove them.