Russia is Lining Up Buyers For Its S-400 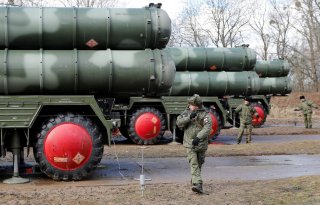 During the Cold War, the Soviet Union widely exported military hardware around the world, and today Russia has remained the world’s second-largest exporter of weapons platforms after the United States. This could be a concern for the U.S. military because a multitude of foreign governments have expressed interest in some of Russia’s most advanced platforms, among those the S-400 “Triumf” medium-to-long range air defense system.

“About ten countries show their keen interest,” Director of Russia’s Federal Service for Military-Technical Cooperation Dmitry Shugayev said in an interview with the RBC media group on Tuesday.

The procedure of signing a contract for the purchase of S-400 anti-aircraft missile systems to foreign customers is a multi-stage and complex process, Shugayev explained.

The S-400 (NATO reporting name: SA-21 Growler) is a mobile, surface-to-air missile (SAM) system that was developed in the late 1990s by Russia’s Almaz Central Design Bureau for Marine Engineering as an upgrade to the S-300 family. China was the first foreign buyer to broker a deal with Russia, while Saudi Arabia and India have expressed interest in the platform. Turkey’s efforts to acquire the platform in late 2017 also lead to its ejection from the F-35 Joint Strike Fighter program.

Now it seems that several other nations around the globe may have a keen interest in the S-400. However, there are still issues that Russia and any potential buyer would need to resolve, including the terms and details of potential delivery, and even available capacities in Russia’s industry for the fulfillment of defense procurement. It therefore could be too soon for pen to meet paper.

Russia has not named which ten nations have expressed interest in the air defense system, yet at least one close Russian partner could be next to introduce the S-400. The defense chief said that he did not see any obstacles to the potential deliveries of S-400 air defense systems to Belarus.

He also said that the heightened demand for Russian air defense and electronic warfare systems suggests that the methods of warfare have changed.

“Now we see that an era of drones and robots has come,” he added. “The more frequently drones and robotic vehicles are used—and unmanned aerial vehicles are employed everywhere today—the greater the need for weapons of their destruction and electronic warfare systems.”