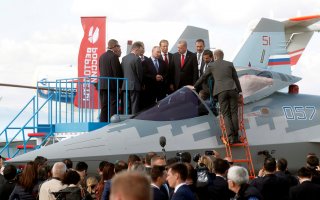 Russian state news outlet TASS published several close-up shots of a static S-70 being rolled out of its hangar by a yellow utility vehicle on Thursday. “The drone’s roll-out signifies the end of the item’s assembly as a whole and its outfitting with all the required onboard equipment in compliance with the requirements for aircraft and the switchover to comprehensive ground tests to prepare for its debut flight,” Deputy Defense Minister Alexey Krivoruchko said. The video showed government and military officials inspecting the drone, but their discussion is impossible to make out from the footage. The clip shows a redesigned nozzle, flattened to boost the drone’s stealth performance. “The new Okhotnik features a flat thrust nozzle as its major feature, which reduces its radar signature,” said Rostec CEO Sergey Chemezov.

Krivoruchko traveled to Novosibirsk to assess development and production progress on the Okhotnik drone. The deputy defense minister witnessed the rollout of the first S-70 prototype and was reportedly shown a second Okhotnik prototype that is currently under construction.

S-70 Okhotnik-B is a flying-wing, heavy stealth combat unmanned aerial vehicle that is intended to serve as a “loyal wingman” drone for Russia’s new Su-57 fifth-generation stealth fighter. According to unconfirmed industry insider data cited by TASS, the drone will boast a top speed of up to one thousand kilometers per hour and a combat range of roughly four thousand kilometers. With two internal weapons bays carrying up to two thousand kilograms of unspecified munitions, the S-70 will apparently be able to execute precision strike missions deemed too risky or tactically impractical for the accompanying Su-57 pilot. The first Okhotnik-B prototype performed its debut flight in August 2019; the drone was spotted flying alongside a Su-57 for the first time later in the following month.

Test pilot Evgeny Frolov told Russian media earlier this year that the S-70 shares much of the Su-57’s artificial intelligence command interface, adding that the final production version of the drone will be able to track and attack enemies in a fully autonomous fashion. Despite the DNA overlap between the two aircraft, the Okhotnik platform may not be exclusive to the Su-57. According to earlier reporting by Russian state media, the upcoming Project 23900 Ivan Rogov amphibious assault ship will be able to carry and deploy as many as four Okhotnik drones.

“Today we are making all efforts to complete the trials as soon as possible and launch serial production,” United Aircraft Corporation’s chief executive officer Yury Slyusar said. There are reportedly a total of four Okhotnik-B prototypes in varying stages of development and production. The first serial S-70 models are slated to enter service in 2024.