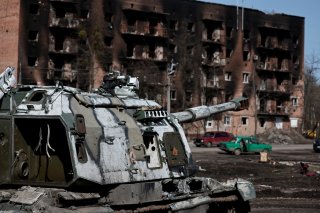 As war rages in eastern Ukraine, Russian forces are reported to be making some scattered and uneven progress in their attack to take over the region.

The prevailing consensus among U.S. Defense Department observers appears to be that Russia has succeeded in learning some lessons from its failure north of Kyiv and is making some gains, in part by solidifying its logistics and supply chain deficits that it experienced during the first phase of the war. A senior Pentagon official told reporters that the attacking Russian force may be moving slowly deliberately to avoid venturing too far in front of its supply lines and becoming unexpectedly vulnerable.

“We definitely see the most demonstrative thing we've seen is their attempt to improve logistics and sustainment. I mean, that's pretty much the most obvious thing that we're seeing them trying to learn from,” the senior official said. ”And we can see that at least one reason why they aren't making a lot of progress -- not the only reason but one reason -- is that they are still wary of of [sic] getting out ahead of their supply lines and getting too far out ahead, like they did north of Kyiv, when they literally just sprinted to Kyiv and then didn't have the backup, didn't have the fuel, didn't have the food, didn't have the spare parts to keep them there. They don't want to make that same mistake.”

The Pentagon official also said the Russians appear to have slightly improved their combined arms maneuver techniques by better “integrating air-to-ground” operations in Donbas. However, Russian forces are continuing to struggle with command and control, the official said.

The mostly flat, open terrain in eastern Ukraine may give the Russians advantages that they did not have in Kyiv, as they can move heavy armored vehicles more easily. However, muddy conditions may require even tracked vehicles to stick to roads, something which could increase their vulnerability to Ukrainian fire.

The senior official also said most of Russia’s cruise missile launch sites are in Russia or Belarus, making it very difficult for Ukrainians to attack them. However, this may be changing as a large number of new artillery units are arriving in Ukraine. U.S.-supplied 155mm Howitzers could give the Ukrainians the ability to attack these launch sites and potentially blunt, or even stop, Russian cruise missile and artillery bombardment. Therefore, Russia’s slow progress may in fact be due to the effective use of artillery and heavier weapons by the Ukrainians.