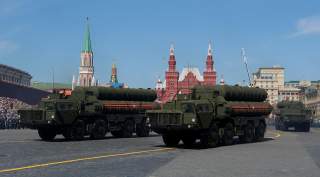 Key point: The S-400 is expensive, but Serbia is intrigued.

In September 2019, Russia and Serbia held their first joint air-defense exercise, Slavic Shield. In this exercise, Serbian air-defense troops learned how to use the S-400 air defense system, practicing its employment against a variety of targets, both simulated and real. Naturally, this opens the question as to whether Serbia plans to buy the S-400. But a look back into the history of Serbia provides mixed answers.

According to an oral history given by former Yugoslavian Minister of Foreign Affairs Živadin Jovanović, the Socialist Federal Republic of Yugoslavia (SFRY) was interested in the S-300 air defense system as early as 1989. Negotiations were underway when the SFRY began to dissolve in 1991, along with the Soviet Union. Deliveries did not occur due to the following civil war and the fact that the SFRY supported the Soviet hardliners during the Soviet breakup.

But following the lifting of the arms embargo with the Dayton accords in 1995, the new Federal Republic of Yugoslavia (basically consisting of the modern states of Serbia and Montenegro) began looking at air defense systems again. Plans to buy the S-300VM variant along with other medium-range systems were put into place, and Yugoslavian air-defense troops were sent to Russia for training on them.

But the Kosovo War in 1998 prevented these deliveries as well. The UN placed another embargo on the Federal Republic of Yugoslavia in 1998. Air defense troops who were training in Russia were not allowed to return, and no launchers or missiles were delivered. Yugoslavian air defense during the Kosovo War was conducted primarily with surplus S-125 Nevas bought from Romania.

With the lifting of the arms embargo again in 2001, the new Republic of Serbia was free to buy weapons again, but was in no position to. Local industry continued to modernize the S-125s, and in 2017 two batteries of Buk-MB launchers were ordered from Belarus, a fairly deep modernization of the medium-ranged Buk missile. But even then, there have been continual reports that Serbia wants to buy the S-300. These reports invariably are denied by both Serbia and Russia, which dismiss them as not being part of the official plan for defense and technical cooperation.

But the inclusion of Serbia in air-defense exercises in 2019 may suggest that the tides are changing. It’s possible that the Serbian Ministry of Defense has been waiting for Russia to begin offering the S-400 to more countries, and now thinks it is an opportune time to make a purchase.

On the other hand, Serbian government-sponsored media published a headline article on September 5 that said Trump’s special envoy the Western Balkans, Matthew Palmer, had offered an incredible deal to Serbia. The deal was a squadron of F-16s, $10 billion dollars, and guaranteed EU membership by 2024 in exchange for recognition of the independence of Kosovo.

While highly unlikely that this is true, as no Western source has reported it and the deal would be incredibly expensive, Serbia has been looking westward recently in arms purchases. Serbia took delivery of several Airbus H145M helicopters and MBDA Mistral short-range anti-air missiles earlier this year. It’s possible that like the former SFRY, Serbia is looking to play both Russia and the West in an attempt to acquire the best weapons for its military. S-400 training with Russia may be just another part of the long play.

Charlie Gao studied Political and Computer Science at Grinnell College and is a frequent commentator on defense and national security issues. This article first appeared last month and is being republished due to reader interest.