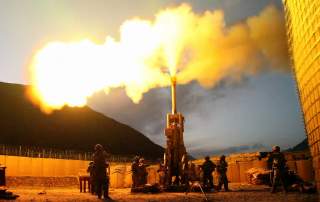 To understand what distinguishes Penicillin, it is useful to understand the state of traditional artillery reconnaissance equipment. Systems like the U.S. Hughes AN/TSQ-51 and Swedish-Norwegian ARTHUR (Artillery Hunting Radar) use radar technology to capture the trajectory of incoming projectiles, allowing them to determine point of origin and travel speed.

Radar systems allow for target acquisition at relatively long distances—especially against systems that fire large projectiles with a stronger signal—and many modern variants can also detect drones. However, radars have difficulty detecting smaller projectiles like mortar shells at anything but the closest of ranges.

They are also susceptible to detection and electronic countermeasures (ECM), a problem only partially alleviated but never fully negated by counter-countermeasures like selecting sites that dampen electronic signature. Finally, counter-battery fire against radar-detected targets tends to involve scouting techniques that run the risk of casualties.

This is where Penicillin comes in. This reconnaissance system uses four acoustic-thermal 1B76 sound locators, a large “stabilization platform” and an “optical-electronic module” to detect and process noise and kinetic energy. High-speed data sorting is facilitated by the inclusion of six regular and six thermal imaging cameras. While in redeployment, the tall mast housing the optical-electronic module can be folded backward.

According to Rostec, these devices working in conjunction enable precise target detection within five seconds at up to a 25 km radius. In addition, they can assess shot accuracy and identify the location of the shot impact point.

These sensors are so accurate that they can purportedly detect a door being slammed shut, even as Rostec claims that Penicillin is “completely automated” to minimize “the effect of the human factor.”

Because Penicillin does not rely on electromagnetic waves like radar technology does, Russian military analysts claim that it is undetectable and therefore cannot be countered by enemy artillery. While Penicillin appears not to be susceptible to ECM in the way that traditional radars are, Rostec’s claim of undetectability remains to be tested in real-use scenarios.

In keeping with the Russian military’s pursuit of modular innovation, Penicillin should be compatible with virtually any artillery weapon. According to military expert Victor Murakhovskiy, “Penicillin is compatible with automated battery-fire units, which are present in almost all modern artillery systems. This allows for two to three times faster target acquisition, as compared with the past when this was done manually.”

Penicillin was first announced in 2017. According to Rostec’s press office: "The system’s state trials are nearing completion. Serial production is scheduled to begin in January 2019. The product is being developed by Vektor R&D Institute, which is part of the [our] group." As of the time of writing, export plans and production costs are unknown.

Whereas modern radar systems vary in effective range depending on signal strength, Penicillin employs a blanket radius of 25 km for all projectiles. There are indisputable tactical benefits to an undetectable artillery reconnaissance system, and Penicillin's thermal-acoustic method should be substantially better at reliably detecting smaller projectiles.

Still, remains to be seen whether Penicillin’s range limitation will make it more of an addition to current radar technology rather than the revolutionary replacement that it is being advertised as.